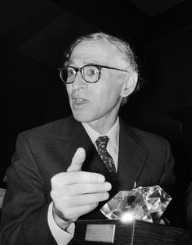 Otto Hahn was born on March 8th, in 1879 in Frankfurt am Main, Germany. He enrolled with the University of Marburg where he studied chemistry. After this, he migrated to London where he could study radioactivity. Here, he worked under Sir William Ramsay. It was in 1938 that Hahn got famous for his nuclear fission discovery with Fritz Strassmann, a radiochemist. As a result of this extraordinary discovery, both scientists were bestowed with a Nobel Prize. Hahn passed away at the age of 89.

Otto Hahn was born on March 8th, in 1879 to Heinrich Hahn and Charlotte Hahn. His father was a successful entrepreneur and that he also earned a living for being a glazier. Hahn was the youngest son in the family. His other brothers were Julius, Karl, and Heiner.

At the age of 15, Hahn had raised interest in science subjects more so chemistry. This is something that the parents easily noticed as he tried out several experiments in their family laundry room. Because his father had invested in some properties in town, his dream was to see his son pursue architecture. However, Hahn convinced his father that his passion was in chemistry.

Otto Hahn's dreams would come true if at all he worked in an industry that was related to chemistry. Therefore, he did not hesitate from taking the job post which was at the University College London. At the university, he was assigned to work under Sir William Ramsay. Ramsay was a famous scientist as he was linked to the discovery of inert gases.

Hahn had to work on radiochemistry which was a new field to him. This led to his first discovery at the university. He discovered radiothorium. This impressed Ramsay as major discoveries were associated with the university.

Several other discoveries followed after this including the discovery of mesothorium I & II, radioactive coil, and protactinium.

In 1938, Otto Hahn and his assistant Fritz Strassmann made a remarkable discovery that would change the world for years to come. With the tedious and lengthy research that they had been through, finally, they discovered the existence of nuclear fission. This discovery earned them recognition, and Royal Swedish Academy of Sciences awarded them a Nobel Prize in 1944.

In 1913, Otto Hahn tied the knot with Edith Junghans. The pair only had one child named Hanno.

Otto Hahn passed away on July 28th, in 1968. He died at the age of 89 years. His cause of demise was said to be as a result of an accidental fall.