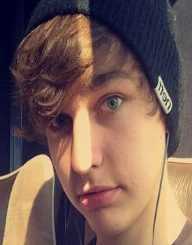 Social media singer-songwriter AJ Mitchell was born on the 17 May 2001 in Belleville, Illinois in the United States.

From a young age, AJ Mitchell has played the piano. He started posting short videos on Instagram in 2013 when he was twelve years old. By early January 2016 began uploading full covers. He also started writing his songs. He quickly built up a fan base on Youtube and later Vine.

People Magazine’s featured Mitchell in their feature 15 Instagram Covers of Love Songs That Will Make You Swoon.

AJ Mitchell moved to LA with his family in 2014.