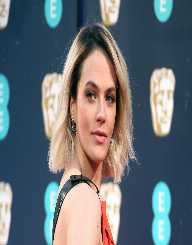 Jessica Brown Findlay was born on 14 September 1989. Her father Christopher Brown Findlay is a financial advisor and her mother Beverly is a nurse and teaching assistant. Findlay is one of two children born to the couple.

From a very young age, Jessica Brown Findlay took ballet lessons and showed a lot of promise. At fifteen, she danced at the Royal Opera House with the Kirov. At eighteen, Findlay Brown her dancing days were over. An ankle injury did not respond well to treatment.

Educated at Furze Platt Senior School in Maidenhead, she then studied for her A Levels at the Arts Educational School. It was during this time that Jessica had three operations on her knee. After the third operation, she realized that her dancing career was over. After finishing her time at the Arts Education School, she enrolled at the Central Saint Martins College of Art and Design.

Before appearing in the award-winning television series, Downton Abbey, Jessica Brown Findlay had appeared in Albatross, playing the role of Emelia Conan-Doyle. She also appeared in The Misfits.

A breakthrough role was playing Lady Sybil Grantham in Downton Abbey. This television series turned into a worldwide hit. Set before WW1 in England, Jessica Brown Findlay was cast as the youngest daughter of an aristocratic family who marries the Irish chauffeur. Her luminous beauty endured her to viewers, and she appeared in Series 1, Series 2 and Series 3. In Series 3, her character dies in childbirth. In an interview with the Independent newspaper in the UK, Brown Findlay said that she decided to leave Downton Abbey.

Following Downton Abbey, Brown Findlay was offered a role in an episode of Black Mirror. She then appeared in Not Another Happy Ending and the mini-series Labyrinth. She was cast as the female lead in Frankenstein. The cast included Daniel Radcliffe. Brown Findlay appeared in the television series Jamaica Inn, based on Daphne Du Maurier's novel. In 2015 she appeared in Lullaby.

Jessica Brown Findlay will appear as Ophelia in a new production of Hamlet at the Almeida Theatre in London. She made her theatre debut at the same venue in 2015 when she played Electra in The Oresteia.

Jessica’s major role was playing Lady Sybil Grantham the multi-award winning television series Downton Abbey. Then there was her role in Winter’s Tale, the film adaptation of Mark Helprin’s novel. Winter’s Tale also starred Jennifer Connelly, Russell Crowe, and Will Smith. Critics loved her portrayal of Electra in The Oresteia when she made her stage debut in London in 2015.

Jessica Brown Findlay won nominations for The British Independent Film Award (2011) and the Evening Standard Film Award (2012), as part of the cast of Downton Abbey who won the Screen Actors Guild Award.