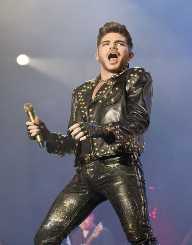 I remember like it was yesterday, sitting with my closest friends on a couch and keeping still for that galloping scene. Nothing else like the eighth season of American Idol. When he surfaced, we just couldn’t stop talking about his shape-shifting. A 6’1” singer Adam Lambert escorted with a glam-rock sartorial elegance and a razor-shape sense of humor. The powerhouse voice from him made us stand in amazement saying; “These are confirmed three Yeses! We remained alert to the end.

The fact remained that an applausive kind of scene happened there and then. The ‘Mad World’ song was one of variety. His rise to stardom started in 2009.He is no one else other than Adam Lambert. He later came to launch his album and scored the highest smash single. In 2010, Lambert was already on a Glam National Tour. He took his electrifying show to thousands of fans across the globe. Of course, they screamed his name to the top heavens and wanted nothing else than to hear his electro-pop rock songs.

Adam Mitchel Lambert was first seen in the world on January 29, 1982, in Indianapolis, Indiana. He was raised by his mothers, Leila set of religion. She is a dental hygienist and his father Eber Lambert works as a program manager. His mother is a Jewish while his father is a Norwegian descent. Lambert has a younger brother called Neil. After Lambert's birth, the family opted to move to San Diego, California. At the age of nine, Lambert was already performing at the Metropolitan Educational Theatre Network. Now known as MET2.Later on, he started acting as well as vocal coaching as he continued to play at MET2.

Adam Lambert went from Mesa Verde Middle School to Mount Carmel High School where he loved to be involved in choir and theater. He continued to perform different vocal cords as well as competing with Local Air Bands Starlight. In 2000 he graduated from high school, and he aimed to engage his life in entertainment fields. He once said that life is all about taking a risk and going for what you know best.

Between 2001 and 2008 Adam Lambert went through various professional jobs. At 19 years of age, Lambert was lucky to land on his first white-collar job. He used to perform on a cruise ship for utmost a year with Anita Mann Productions. Later on, he went on achieving his dreams by playing for light opera in  Orange County, California. At 21, he was lucky to have a hired manager who helped him tour journey his music across Europe.

In 2004 Lambert’s presence was seen in TUTS-Theatre under the Stars the production of Brigadoon. He later went on and cast the role of Joshua in the "The Ten Commandments.” In 2005 he was hired to take the role of Fiyero as an understudy.In 2007 and 2008 Lambert had already finished performing his musical tour.

As stated above, Adam Lambert took out season eighth American Idol by storm. Though he didn’t take the first position, he was still the best of all. I am only trying to mean that Lambert received more attention from fans than other competitors. Even then, he returned several times and took a judging role on America Idol. His soundtracks especially one titled “Time for Miracles” had sold over 200,000 copies during its first week. He as well signed with RCA and started to launch his album with the help of Rob Cavallo, RedOne, and Justin Hawkins. Lambert once said that he is always inspired by Lady Gaga’s musical theme. He didn't wait to write the song “Fever” and “For Your Entertainment” with her, that was loved by all age.

Adam Lambert received several awards, thanks to his one of a kind song. On January 31, 2013, he garnered the Unity Award from “We Are Family Foundation” for spreading “amicable messages.” In 2013 he was lucky to attain a sit at GLAAD Media Award by the Gay and Lesbian Alliance Against Defamation. In 2009 he was honored with Young Hollywood Award as the artist of the year. In 2015 he received an Eska Special Award. In 2009 he was ranked in the second position in the American Idol in the Teen Choice Award.

Even when he is busy on tour, Adam Lambert always set some time to do what he loves best. He has had a chance to support more organizations than other artists; thirteen charities in total. Thus; Charity; Water, AIDS LIFE,Donorschoose.com,DoSomethig.org, Family Equal Council, GLSEN, It Gets Better Project, Musical on Call, Red Cross, The Trevor Project, Save The Music Foundation and We Are a Family Foundation. Lambert has also supported more than ten causes worldwide. Some of them include Civil Rights, Bullying, Education, Disaster Relief, Parent/Family Support, LGBT Support, Water, Poverty and much more.

Adam Lambert was once in a relationship in 2010 with a reality television personality Sauli Koskinen. Sorry, he admitted that he was a gay in 2009.From 2013 onwards he said that he isn’t interested in any relationship so far. He once stated that “As far as I know I am exclusively addicted to keeping my album in check.” Above all, he will remain as an iconic legacy both in America Idol’s success and globally.