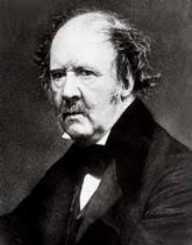 William Henry Fox Talbot was an English inventor and scientist, who made significant contributions to the field of photography.

William Henry Fox Talbot was born in the county of Dorset, England, on February 11, 1800. His father was William Davenport Talbot. His mother was Lady Elisabeth Fox Strangways. His maternal grandfather was the 2nd Earl of Ilchester. His father died when he was very young, and his mother remarried a few years later. He had two half-sisters, named Caroline and Henrietta.

William Henry Fox Talbot started his education at home with the governess Agnes Porter. He then went to the Harrow Boarding School in Rottingdean. In 1821, he graduated from Trinity College at Cambridge University. There, he won the Porson Prize for Greek Poetry, and he was one of the top mathematicians in his class.

In the 1930s, William Henry Fox Talbot started to work on photography, which was still a developing field at the time. He experimented by using different chemicals, such as sodium chloride, silver nitrate, and gallic acid.

He developed two photographic processes – the salted paper process and the calotype process. They became an essential base for the future development of photography. In the 1840s, he worked on photomechanical reproduction.

Talbot created the calotype around the same time French photographer Louis Daguerre made the daguerreotype. After some dispute, it was determined that the inventions were entirely different. In the 1950s, Talbot applied for strict patents for his inventions.

Their use was minimal, which stifled the development of photography. Many people fought with him over this, including members of the Royal Society. He was involved in several lawsuits. He ultimately decided not to extend the patents.

William Henry Fox Talbot published his book of photographic illustrations, called The Pencil of Nature. He received the Royal Medal and the Rumford Medal for his contributions to the field of photography.

William Henry Fox Talbot began sending mathematical papers to the Royal Society in 1822. He was elected as a member in 1831. He wrote scientific papers for the Edinburgh Philosophical Journal, the Quarterly Journal of Science, and the Philosophical Magazine.

From 1832 to 1835, he served as a Member of Parliament, representing Chippenham. In 1840, he served as the High Sheriff of Wiltshire. He also worked on archaeology. He published Illustrations of the Antiquity of the Book of Genesis, Classical and Antiquarian Researches, and English Etymologies.

In 1832, William Henry Fox Talbot married Constance Mundy. She became the first woman ever to take a photograph. They had daughters named Ela, Matilda and Rosamond, and a son named Charles.

William Henry Fox Talbot passed away on September 18, 1877, in the village of Lacock, Wiltshire. He was 77 years old.