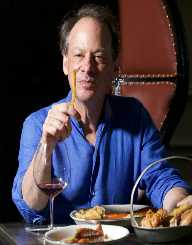 Adam Gopnik is an American book and magazine writer.

Adam Gopnik was born in Philadelphia, Pennsylvania, on August 24, 1956. He spent his childhood in Montreal, Canada. His parents’ names were Myrna and Irwin. Both of them worked as professors at McGill University. He has five siblings. He attended Dawson College. He got a bachelor’s degree from McGill University. After that, he got a master’s degree from the New York University Institute of Fine Arts.

In 1990, he curated an art show at the New York’s Museum of Modern Art with his friend Kirk Varnedoe. In 1995, The New Yorker sent him to live in Paris. He wrote essays about life in the city, called “Paris Journals.” He returned to the United States in 2000. He became a staff writer for the magazine, writing on a variety of topics.

Gopnik’s first book was called High & Low: Modern Art and Popular Culture. It was based on the art show that he had curated. In 2000, he collected the essays he wrote about Paris in a book, called Paris to the Moon. In 2005, he wrote a children’s book, called The King in the Window. In 2009, he published Angels and Ages, talking about Charles Darwin and Abraham Lincoln. The next year, he wrote another children’s book, The Steps Across the Water. After that he wrote The Table Comes First, talking about food and restaurants.

Adam Gopnik has also written text for stage productions. He wrote for the comedy Table, the opera Sentences, and the one-woman show Sing the Silence. He also worked on several songs and musicals. He gave a series of lectures at the Lincoln Center, called The History of the World in 100 Performances. He taught at a writer’s retreat in Reykjavik, Iceland. He also worked on the Massey Lectures across Canada. He is a jury member of the International Children’s Film Festival in New York. He is also a contributor to the TV channel BBC Four. He was a guest on the Charlie Rose talk show.

Adam Gopnik's wife is called Martha Rebecca Parker. They have a son named Luke and a daughter named Olivia.