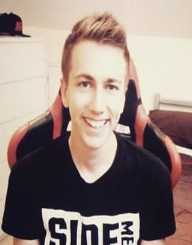 Londoner YouTuber and vlogger Simon Edward Minter was born in Leeds, Yorkshire, England on the 7 September 1992. He has two brothers, Nick and Johnny.

Simon Edward Minter was educated at a private school in London and enrolled at university but left without graduating.

A football fan and Leeds United FC supported from a young age. Simon Edward Minter started his youtube account in February 2008 and posted a video about the FIFA video game franchise. Using the handle, Minimiter Minter became known for his vlogs and commentary relating to the video game FIFA.

Simon Edward Minter is now the owner of two YouTube channel: miniminter and Channel mm7games which have in the region of eight million subscribers. His collaboration with others led to the group Ultimate Sideman, of which he was a founding member. His videos feature other members of the Ultimate Sideman and include football challenges and quizzes.

Simon Edward Minter has also started writing and commentating on other video games and also collaborates with others and is a founding member of Ultimate Sideman. He averages three videos a day for both his channels. His main channel focuses on FIFA and football videos, Sidemen reactions, vlogs and Q&A sessions. His other channel is primarily focused on the video games Grand Theft Auto V and Cards Against Humanity.