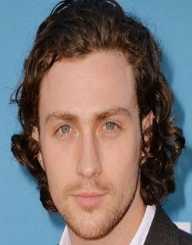 Aaron Taylor-Johnson is an English actor who rose to stardom after featuring in films Kick-Ass that was released in 2013. He also appeared in Nocturnal Animals in a supporting role that later won him Golden Globe Award.

Aaron Taylor-Johnson was born in Wycombe, Buckinghamshire on 13th June 1990. His parents are Robert Johnson who is an engineer and Sarah who is a housewife.

During an interview, he describes where he grew up as 'Rubbish' claiming that he felt he did not fit the surrounding. He, however, knew he wanted to be an actor. His sister, Gemma is also an actor; she featured film, Tom & Thomas. Johnson is born from a Jewish family, a path he also took.

He went to Homer Green Senior School and later Jackie Palmer Stage School from 1996 to 2008. In school, Johnson was an active drama member.

Aaron Taylor-Johnson's most significant breakthrough in the acting industry came in 2008 when he took a role in Angus, Thongs and Perfect Snogging, a teen comedy show.

Two years later American audience would see him on their screens after he featured in film Nowhere Boy, a role he took as Lennon. He later admitted that the role was one of the most difficult in his acting career.

Johnson's role in the 2010 Kick-Ass saw him play a role as comic book devotee who later turns into a superhero. The action movie Kick-Ass performed well in the film industry earning approximately $100 million just a month after its release.

In 2015, Aaron Taylor-Johnson starred as a bomb expert in film Godzilla, a movie that earned over $500 million across the globe.

One year later his role in Nocturnal Animals won him the Golden Globe Award for his supporting role. He played as an American Soldier alongside John Cena in 2017 in the thriller The wall.

John's current project is Outlaw King. It is an action movie about Robert the Bruce which tries to explore the happenings of the Scottish independence.

Aaron Taylor-Johnson is married to Sam Tylor Wood, a film director. The couple met in 2009 during a film shot. Johnson was 18 and Wood was 42. The two later announced their engagement later that year. Although the announcement came as a surprise to many due to their age difference, the two got married on 21st June 2012.

The couple has four children. Two, however, are from his wife's previous relationship.

He was the first Golden Globe Award winner who also got a nomination for the BAFTA Award for being the best actor.