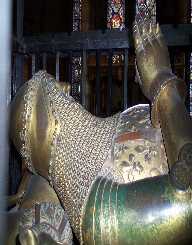 Edward, the Black Prince, was born in Woodstock, Oxfordshire, England on 15th June 1330, the eldest son of King Edward III, and Philippa of Hainault. He was born to the House of Plantagenet, one of nine children.

Edward, the Black Prince, was known for his military acumen, and for being a great military leader. The English people loved him for his military prowess, especially his victories in his battles with the French.

Edward, the Black Prince, fought many battles with the French, and on several occasions, his victories were so comprehensive, the French armies were crippled for years afterward. Among his more notable victories was the Crecy Campaign which was conducted to the north. This battle decimated the French army for ten years.

Another battle called the Great Raid of 1355 was conducted in the Aquitaine area and destroyed the economy of southern France. This battle was also instrumental in Edward, the Black Prince gaining many followers that went into battle for him.

A significant battle was the Reims Campaign. The outcome yielded mixed results but was still mostly in Edward’s favor. Peace followed the battle, but the English finished up with a smaller area of France than what they had hoped to originally gain.

Edward, the Black Prince, was the king’s representative in Aquitaine. He and his wife, Joan, held court there, and it was a haven for exiled kings. It was also considered one of the most fashionable of the time.

As well as his great military career, Edward, the Black Prince took over as regent on three occasions while his father, King Edward III, was away fighting. He also performed the duties of High Sheriff of Cornwell on various occasions between 1340 and 1374.

As Edward, the Black Prince died, the throne went instead to his son, Richard II.

Edward, the Black Prince, was a founding Knight of the Garter in 1348.

Edward, the Black Prince, married his cousin, Joan of Kent, in 1361. He had to ask special permission from Pope Innocent VI as Joan was a blood relative. Permission was granted. They had three children – Richard II of England, and Edward of Angouleme.

The marriage was also controversial, because Joan had a marital history, which was frowned upon, and because she was English, it also stopped England from forming a stronger alliance with an overseas nation.

Joan had children from her first marriage, to which Edward became stepfather.

Edward, the Black Prince also had illegitimate sons that were born before he got married – Sir Roger Clarendon, Edward, Sir John Sounders, and Sir Charles FitzEdward.