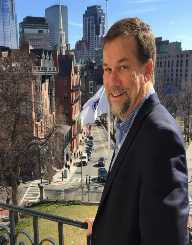 American journalist and broadcaster Aaron Brown was born in Hopkins, Minnesota on the 10 November 1948 to Rose and Morton Brown.

Aaron Brown studied political science at the University of Minnesota but left without obtaining a degree.

Aaron Brown joined the US Coast Guard and later broke into broadcasting by working in radio in Minneapolis and Los Angeles. In 1976, he joined Seattle's King TV; then in 1988, he moved to KIRO-TV (1988-1991). He was then offered a position with the ABC Network in New York as their World News Now anchor (1992-1993) and worked as a reporter for Nightline and as the anchor for Good Morning America Sunday (1997-1999).

Aaron Brown joined CNN in July 2001. His first appeared on-air on the 11 September 2001 and won the Edward R Murrow Award for his coverage of the attack on the World Trade Center. Brown went on to have a successful career with CNN. He reported on many major events including the Space Shuttle Columbia disaster (2003) and the Invasion of Iraq (2003). Brown left CNN in 2005 and was replaced by Anderson Cooper.

Aaron Brown lectured in journalism before returning to television in 2008-2009 as the anchor of PBS’s Wide Angle, a documentary series.

Aaron Brown is married to Charlotte Raynor, and they have one child, a daughter Gabby.