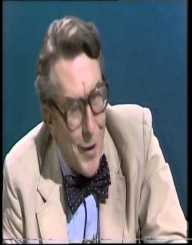 Robin Day was born on October 24, 1923, in Hampstead Garden Suburb in London. His father was a telephone engineer and later became a telephone manager. Day attended the Brentwood School and graduated in 1938. After that, he went to the Crypt School in Gloucester and Bembridge School on the Isle of Wight.

When World War II broke out, Day joined the British Army and served from 1943 until 1947 in East Africa. He ascended to the rank of Captain. After his service in the army was done, Day enrolled at the St. Edmund Hall in Oxford. During his time in Oxford, Day was elected the president of Oxford Union and debated society. He went to tour the United States with the English-Speaking Union.

After graduating from St. Edmund Hall, Day was called to the Bar at Middle Temple. He practiced law only for a brief period starting in 1952. After leaving his career in law, Day began working in journalism and spent his whole career in the field. His breakthrough job was at the Independent Television News, where he began working in 1955. Day became the first British journalist who interviewed President Nasser of Egypt after the Suez Crisis.

Day began working on television by hosting the television show Panorama. In 1979, he became the chair of Question Time and worked there for the next ten years. From 1979 until 1987, he was the presenter of the radio show The World at One. He became known in the broadcasting word as the Grand Inquisitor due to his abrasive interviewing style.

Day began working for BBC Radio in early 1970s and hosted the show It’s Your Line- a national phone-in program which enabled nation’s people to ask questions directly to the politicians. This show was first of its kind and later spawned into the show Election Call. From 1979 until 1987, he presented The World at One show.

From 1960s until 1987, Day was a regular on BBC general election programs. When he left the Question Time, Day began working for BSB, presenting the weekly discussion program Now Sir Robin. The BSB later merged with Sky Television and continued his program.

During the 1990s, Robin Day was a contributor to the Chanel Four political program Around the House. He also presented the show Central Lobby. One of Day’s biggest achievements was his campaign for the televising of parliament. He campaigned for the matter for 25 years, claiming that is not in the interests of television but the parliament itself.

Day was often featured on the sketches of Monty Python’s Flying Circus. He was also lampooned by the television program Spitting Image, from which the most famous one is the interview with the prime minister Margaret Thatcher. Day has published two autobiographies- Day by Day and Grand Inquisitor.

Robin Day married Katherine Ainslie in 1965. She was an Australian law don at St Anne’s College, Oxford. The couple had two sons together. One of Day’s sons sustained multiple skull fractures from a fall during his childhood and never fully recovered. However, in 1986 the couple divorced.

Day tended towards being overweight. In 1980s, he had to undergo coronary bypass surgery. Day also suffered from breathing problems, which were often noticeable when he was on the air. Day died on August 2000, due to complications from his heart condition.