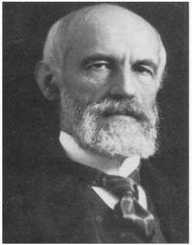 G. Stanley Hall was an American psychologist who was also credited as the founding father of educational and child psychology. He wrote several books that became the reference for the future study of said science. He also served as the American Psychological Association’s first president which was appointed to him in 1892.

G. Stanley Hall died at the age of 78 in Worcester, Massachusetts on April 24, 1924. As a tribute to him, the Liberty Ship SS Granville S. Hall was named after him, which was used in World War II.

Born on February 1, 1846, as Granville Stanley Hall in Ashfield, Massachusetts, he was the son of Abigail Beals and Granville Bascom Hall. His mother worked as a teacher while his father served at the Massachusetts legislature. Growing up, he spent his childhood at the farm and developed a keen interest in reading of which one of his topmost interests was bodily skills and animals.

By the age of 16, he was already teaching students what he learned and some of these students were even older than him.

Hall developed an interest in psychology after reading the book Principles of Physiological Psychology by Wilhelm Wundt. Soon after, he decided to pursue a degree in psychology, his doctoral studies, at Harvard University, and attained it in 1878. While studying at Harvard, he met William James, who was at the time responsible for the first psychology class held in the United States.

Seeing as there were not many options for a psychology graduate in the country at the time, Hall flew to Europe to further his studies at the subject and enrolled at the University of Berlin. There, he spent time at a laboratory in Leipzig in 1879. While spending time in the lab, he became acquainted with Hermann von Helmholtz, a German physiologist, and physicist and also discovered the value of using questionnaires during psychological research.

Upon attaining his psychological degree at Harvard, he began giving lectures regarding the topic of education and soon after produced two writings: dealing with children’s lies which was produced in 1882, and the contents of children’s minds which was published the following year in 1883.

The same year in 1883, he was offered a teaching position at John Hopkins University which he accepted and taught psychology and pedagogics until 1888. He worked in what is now considered as the first formal American psychology laboratory established in 1883.

G. Stanley Hall also established the first American journal called American Journal of Psychology in 1887 and the following year, aided in the foundation of Clark University in Worcester, Massachusetts. The following year in 1888, Hall also became a member of the American Antiquarian Society.

Overall, Hall’s publications regarding psychology amounted to 489 works. He covered almost all of the topics regarding the psychology of which the most popular and important one is his first publication in 1904 entitled Adolescence. Some other publications of his that were more popular were the 1917 publication of Jesus, the Christ, in the Light of Psychology, as well as Senescence, the Last Half of Life which was published in 1922, and his autobiography entitled Life and Confessions of a Psychologist in 1923.