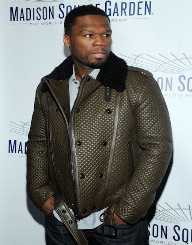 Rapper and actor 50 Cent was born Curtis James Jackson III on the 6 July 1975. He was brought up in New York City by his mother until she died when he was young. His mother, who had turned to drug dealing to support herself,  was only twenty-three when she died. Jackson was eight years old at the time and was brought up by with his grandmother.

During his youth, 50 Cent came interested in boxing and competed in the Junior Olympics. In his preteen years, he got involved in drug dealing. In the tenth grade, he was arrested at school for dealing drugs and having a firearm. He was sentenced to up to nine years in prison, but after six months in a boot camp, he was released. It was around this time that he gave himself the nickname 50 Cent.

Jackson dropped out of high school.

In the mid to late 1990s, 50 Cent became interested in rapping. He met Jam Master Jay who taught him a lot about music including how to write songs.  Jam Master signed a deal with Jackson in 1997 to promote him, and Jackson started gaining attention in the hip-hop world. The record companies also started to pay attention, and in 1999 Columbia Records signed him up.

Jackson did not make much money out of the deal, and Columbia Records seemed uncertain as to which direction they wanted him to go in. Jackson became impatient and cut a single How to Rob. Around this time he was shot nine times and was lucky to survive. Columbia subsequently dropped him from their label.

Jackson’s breakthrough song  Wanksta was written in 2002. He sent some of his music to Paul Rosenberg, Eminem’s manager and this resulted in Eminem inviting him to LA. Jackson was signed up to Shady/Aftermath Records. Wanksta was used on the soundtrack of 8 Mile and gained Jackson a lot of exposure.

Produced by Dr. Dre and Eminem, Jackson’s debut album Get Rich or Die Tryin was released in February 2003. The album debuted on the Billboard 2000 at number one and the single, In Da Club became one of the most listened to songs in radio history within seven days.

Jackson’s first feature film was 'Get Rich or Die Tryin’ (2005), a hip-hop crime film. His next movie was Home of the Brave (2006), a drama about four American soldiers returning to America after a tour of duty in Iraq.

Jackson ventured into business. A particularly lucrative deal was with Vitaminwater which was later sold to Coca-Cola for millions. However, in 2013, the Hollywood Reporter wrote that Jackson’s businesses had posted losses of more than $10 million.

A multi-award winning artist 50 Cent has won 135 various nominations and won 83 awards. These include three ASCAP American Music Awards, four Pop Music Awards, three Black Entertainment Television: BET Awards and thirteen Billboard Music Cards. He has received fourteen Grammy Award nominations and in 2010 be he won a Best Rap Performance By A Duo Or Group for Crack A Bottle with Eminem and Dr. Dre.

Jackson’s son Marquise was born October 1997 in Los Angeles. His son’s mother is Shaniqua Tompkins. There were court proceedings after Tompkins and Jackson split up. She accused him of attempting to burn down the house and kill her.

50 Cent was in a relationship with model and actress Daphne Joy, and they share a son,  Sire. There were accusations of domestic violence after the relationship ended.

50 Cent is on the Board of Directors of the G-Unity Foundation, a foundation which provides grants to nonprofits working to help the quality of life for low-income earners and communities in need of assistance. He has also supported LIFEbeat, the New York Restoration Project, the Orca Network and Shriners Hospitals for Children.

Just as his career was starting to take shape in 2000, 50 Cent was shot outside his grandmother’s house in South Jamaica. He was shot nine times and hospitalized for a fortnight.

In July 2015, a jury found 50 Cent liable for $7 million regarding the release of a sex tape without his accuser’s permission. He then filed for bankruptcy protection. In 2016 Rolling Stone reported that Jackson’s bankruptcy case was over with a judge signing off on a deal by which Jackson had agreed to pay his creditors $23 million over a five-year period.

Business Insider Australia reported in October 2015 that 50 Cent was suing a Wall Street law firm for non-performance during a legal battle over a deal to market headphones using his brand.