How good or bad is the love compatibility between a Aquarius and Aries emotionally, mentally and sexually? Read on…

The Aquarius Aries in love will both have a very good understanding of each other’s idealistic and excited view on life. They will both want excitement and new experiences. The wilder and more weird the experience is, the better. They will both enjoy being thrill seekers and showing off. 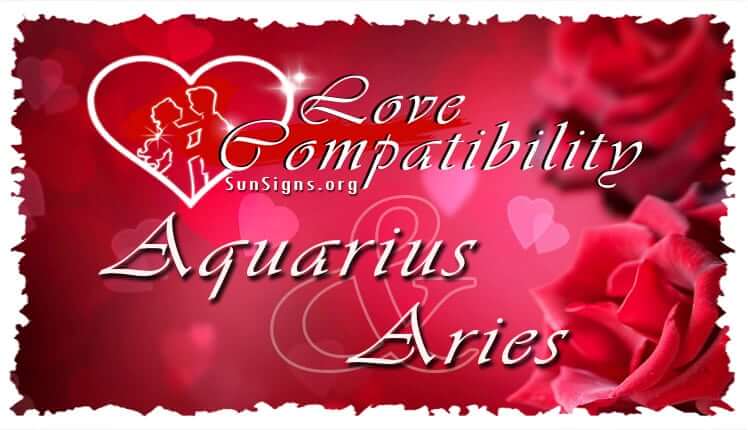 The best thing about the Aquarius and Aries compatibility in a romantic relationship is how they can accomplish a lot when they work together. Cardinal Fire and Fixed Air will cover all possibilities. They will have a relationship that will have vision and practice.

This Aquarius Aries friendship could change the world together. However, they might not be together long enough. Aquarius and Aries soul mates will have a strange and good relationship when they work together. This will not be a good conventional relationship because they both see the world in different ways.


Aquarius is the visionary of the zodiac. Aries is the hero of the zodiac. Aquarius and Aries relationship might seem like one in which they can learn a lot from each other. At the same time, neither the visionary nor the hero will think they have anything to learn from each other on a personal level. They can both be arrogant. This might hold them both back. Aries can be arrogant and selfish in a direct and personal way. Aquarius personality will not be arrogant on the surface. But overall this Aquarius Aries relationship an work.

However, they might display a kind of intellectual arrogance. This will turn the Arian off. Aquarius dating Aries will be compatible as friends or in a professional relationship. However, their zodiac compatibility will be strange enough that it might not work in love and romance.


The Aquarius and Aries compatibility will have a relationship that is based on them having a lot of admiration for each other. The ram will adore how unique Aquarius man or Aquarius woman is. They will see them as their pioneering vision of the world. The Aquarian will love the energy and initiative that the Aries man or Aries woman has. They will have a lot of new ideas.

The planets Saturn and Uranus rule over Aquarius and the planet Mars rules over Aries. Saturn is concerned with karma and social conscience and philanthropy. Uranus is concerned with rebellion. It will give the water bearer their very good, progressive vision. Mars is concerned with passion. It can mix very well with Uranus and Saturn. It will be able to give the other planets’ thoughts and ideals passionate, direct action.


Aquarius is an Air sign. Aries is a Fire sign. Air will fuel fire and help it to spread. Aquarius will be able to Aries think up new things and then realize them. They will challenge the Aries men and Aries women intellectually. They are mentally active. There will not be other zodiac signs that can stimulate the Aries personality in the same way. They will both have a varied range of interests. Aries is more physically active. They will get from their lover what they need to have new adventures and experiences.

Aquarius and Aries compatibility will be hard to understand. Mars will rule over Aries and is about passion and war. Aquarius will not like this. They are ruled by Saturn and Uranus. Saturn will be rational and will be about restraint. Uranus will be about vision.

The Aquarius born is against war, even the more internal and relationship kind. They will have too much vision. They will want to rise above the small arguments that the ram will be good at having. Aries will feel suffocated by Aquarian’ lack of emotional displays. They might feel that the water bearer is more witty and intellectual. They will not like this. Aquarius and Aries love compatibility can be good but they will have to compromise.

Aries will admire the way Aquarius is strange and eccentric. In turn the Aquarian will be impressed with how the Arian can easily get things done. If they can learn to work together, they can have a creative relationship. Aries will be able to give Aquarius’ ideas action. There are a lot of people that could benefit from this Aquarius and Aries relationship.

However, in an Aquarius and Aries marriage, they might find it hard to be together. Their relationship will work best when they are in an unconventional relationship. They will benefit from a different kind of lifestyle. They will be less compatible when they have a relationship that is in a reality where bills have to be paid and trash has to be taken out. They will have a lot of respect for each other. However it will fade under the stress of everyday life.

Aquarius and Aries in love will both value freedom. Aries can be somewhat clingy. At the same time, they might be emotionally distant for self preservation reasons. They might have a special bond, but they will see the world in different ways. They will both need to understand this about each other.

Aquarius could think the ram is too involved. Aries might think the water bearer is too unpredictable. Both sun signs are very impulsive and unpredictable. They will both need to reassure each other that the relationship is important and secure. If they can do this, they can have a successful Aquarius Aries relationship.

Aquarius Aries  in bed can definitely warm up in a physical relationship. An interesting sexual relationship will help keep them together. However, Aquarius can be emotionally distant. Aries can be envious and will not understand them being distant.

Because of this, they might have more arguments. Fire will need air to spread. However, air will not need fire the same way. Air that is warmed by fire can rise to new heights. Aquarius can benefit from Aries being able to inspire and encourage. If Aquarius will lose their freedom because of the inspiration they are likely to say no. They will demand independence. Aries will demand devotion. When that doesn’t happen, an Aquarius Aries breakup is on the cards.