Across the world, the fir tree is probably most recognizable symbolically as a Christmas tree. Early Christians decorated their Christmas firs with apples and candles, symbolizing the knowledge and acceptance of Adam and Eve’s original sin and the light of Christ, respectively. Joined together on the tree, they believed that they were emulating Christ vindicating humanity.

Thus, centuries followed in which Christians viewed the fir tree as symbolic of the “Tree of Life”. All of this is quite curious, though. The symbolic meaning of a Christian holiday, ironically, originated in pagan culture. In paganism, the evergreen fir served as a representative of the stamina required to endure and survive the winter months.


The time between December 25 and mid January presents the coldest days of the year. Pagan lore dictates that this was the time when evil spirits were at their strongest. Massive evergreens served as protectors from them and, when covered with candles, they could light up even the darkest, coldest, and most wicked of nights. 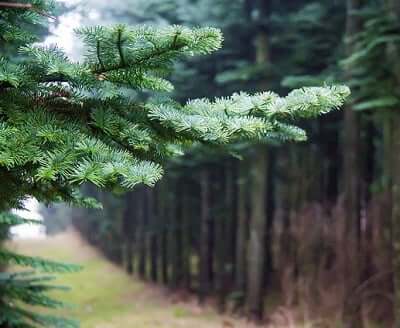 Furthermore, the fir trees were (and continue to be) symbolic of the cyclical nature of life, including death and rebirth. Scandinavian and Norse traditions followed a similar route of interpretation with firs, decorating them around the time of the winter solstice. Read about Wiccan Yule Sabbat.


During this time each year, people burned the trees to celebrate the life that perseveres even through the most tough and frigid times of the year. These rituals are a celebration marking the end of an old year and the start of a fresh one.


Specific parts of the mighty fir tree were also specially noted for symbolism. As said above, the solid and straight trunk was representative of leading a life that is honest and true to yourself. We only have this life to make our mark, and people often waste much of it by behaving in a way that lives up to others’ expectations. While it can be important (and kind) to do things in order to make someone else happy, individuals can only truly be fulfilled if they follow their own path.

Fir cones, the fruits of fir trees, are also significant from a spiritual perspective. The fir was viewed as one of the earliest weather forecasters, as the cones were responsive to atmospheric conditions. When the sun shines, cones open up and are receptive, while impending rain causes them to close. Following these observations, people have also deemed firs as signifiers of keen perception and accurate prophecy.

As with other trees, the Celts also found grand and significant symbolic meanings in the fir tree. In fact, this tree was identified as one of the nine sacred woods used in a special ceremonial fire, the sabbat. The main attributes that Celtic Druids found while admiring this particular tree include honesty, dedication, and fairness, as you can observe the tree growing straight upward.

The strong trunk reminds us of the cruciality of possessing a strong core, which for us refers to our true character and values. On a softer note, firs frequently grow together in groups, a sure symbol of friendship and sociability. They remain green and blue throughout the year, reminding us to care for and cherish our life-long connections and relationships.

Additionally, fir tree symbols were meant to signify a long and healthy life, as long as the viewer kept his/her focus on making progress and practicing resilience during tough times. These green giants have exceptionally long lives themselves, in addition to the fact that they typically live in challenging climates with shoddy soil.

Firs symbolism stands for power of determination and perseverance. Celts also appreciated the importance of remembering the past, learning from one’s mistakes and cherishing the wonderful times. Life is a gift and fir trees serve to remind us to not take that for granted.

Lastly, many believe that firs were used as burial markers at Celtic and Druid grave sites. The graves of important members of society, such as chiefs and war heroes, could then be identified from great distances. This, too, goes along with the theme of reverence and respect for the past, including those who have made their mark.

No matter which belief system you connect with most, though, one thing is certain: the fir tree has many lessons to teach us. All we have to do is open our heart and mind.