And she can draw him out of his comfort zone with her infectious sense of adventure. Maintaining a satisfying Aries woman Capricorn man friendship will require combining their two personalities in a complementary manner.

When the Aries woman is dating the Capricorn man, she can come up with new ideas while he organizes the minute details. He is calm enough to tolerate her temper when she feels he’s too detached, and she is loyal enough not to leave at the first sign of trouble. When both the Aries woman and Capricorn man in love are committed, they can make it work. Also get Aries woman dating tips.

And they do make it work in the bedroom. Her passion brings out his fun side, and she can overwhelm him with pleasure again and again. And while the Aries woman generally initiates the physical aspect of the Aries woman and Capricorn man relationship, the Capricorn man sexually responds with intense admiration and affection. 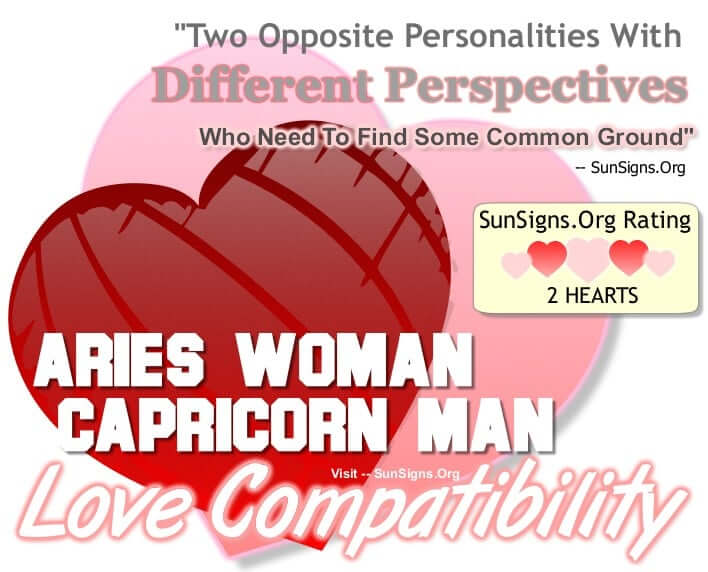 This enhances the sexually compatible lovemaking between the Aries woman Capricorn man in bed, for they enjoy the intimacy of exploring each other’s bodies. The Capricorn man in love will give himself completely to his Aries lover, and she will gladly dominate him. This is one sign that will tolerate her possessive nature with ease, and she will understand and appreciate that quality in her goat lover.

Both the Aries female and the Capricorn male are determined in their careers, which is one of the few things on which these two star signs agree. But even in this area, they utilize their energy differently. He embodies self-discipline and analyzes his every move, while the Aries woman in love pushes forward without any concern for the consequences. Both options work in business but may not work on a personal level.

The main problem in the Aries woman Capricorn man compatibility is the innate natures of the two zodiac signs. The fire sign Aries is very passionate, while the earthy Capricorn is more practical. She is intense and impulsive which can be a turn-off for him, while he is calm and detached which can drive her crazy.

She is carefree and independent, the exact opposite of her reserved partner, making this a difficult Aries compatibility to maintain. But the one thing they do share is ambition, and if the Aries woman and Capricorn man can create a series of checks and balances they can learn to live in harmony.

Ultimately, the key to staying together for the Aries woman Capricorn man love compatibility is communication. She needs to be less aggressive, and he needs to be more open. If she can curb her impulsive tendencies, he may be more accepting of her independent nature. They just need to give each other the benefit of the doubt.

Consequently, if he can express his feelings, more often she will be more tolerant of his conservative tendencies. There will be a lot of give and take on both sides in this Capricorn compatibility. But Aries is devoted, and Capricorn is grounded. If they cannot make a few changes, then an Aries woman Capricorn man breakup is on the cards.