You are a Cancer if you were born between June 21st – July 22nd. The Cancer man traits show that he may seem a bit rough on the outside, but on the inside there lies a much more approachable man.

The Cancer male may try to hide his more sensitive side when around other men and his friends, but if he finds a loyal partner then he is sure to show that side more often.

It will take a while for a Cancer personality may to feel comfortable with showing his true self, but the wait will be worth it. Even though a Cancer man can be nice around his friends, he will be even better when he shows how he really feels on the inside. 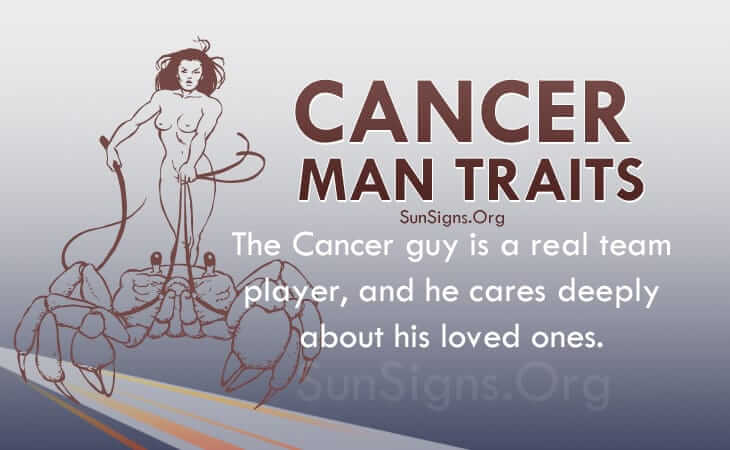 Although the Cancer man acts tough around his friends, he still cares for them. He will do whatever he can to help them if they get into a troubling situation, emotionally or physically.

The Cancer guy is a real team player, and he cares deeply about the people who he spends the most time with, even if he may not show it all the time. The Cancer man personality traits show he will spend a lot of his time reminiscing about the old days, and how great or terrible that they were. One flaw of Cancer is to other think about situations that cannot be changed.

The Cancer man characteristics show he will work hard to earn the money that he deserves. Since he works so hard for his money, he is not likely to spend it on silly things that he does not need.

He will be very practical with his money and will not spend it impulsively. He may also over think about his finances, and worry about not having enough money when he really does. This helps to keep the Cancer man financially stable for the most part, but it can also cause a lot of unnecessary stress.

The Cancer man traits show he has a strong sense of intuition that he uses to guide himself through much of his life. This can be especially useful when at school or at their workplace. This more or less gives the Cancer man better judgment skills than some of the other star signs.

He can sense when something doesn’t feel right. For instance, the Cancer man personality is not likely to fall for scams. The Cancer’s good judgment can also help to make good decisions in life, like making wise investments in stock or in other similar situations.

While the Cancer man doesn’t indulge much, he has trouble with food. He will often eat too much, or eat more sweets than he should, and this can cause him to gain weight and become unhealthy.

A Cancer man characteristics show he will have trouble keeping his weight at a healthy level, and he will likely join a gym or play sports with his friends to try to lose some of the extra weight. The Cancer man will need help when it comes to avoiding sweets and extra portions of food.

When it comes to looking for a romantic partner, the Cancer male will take his time. He won’t want to rush things. He will want to make sure that he is with the right partner.

After all, the Cancer man wants to be able to come home to a loving family when the day is done, and he can’t do that if he doesn’t carefully pick his partner.

The Cancer man personality traits show once he picks his partner he will love him or her unconditionally, and be an exceptionally loyal partner. If a Cancer man wants to stay in a great relationship then he will need to be with a trustworthy partner with similar values.