Cancer As A Father Personality Traits

Very much like the Cancer mother, the Cancer father’s world is also built entirely around his family.

The Cancer father traits show that his biggest aspiration in life is to become the best father anyone has ever seen; a “super dad”, as some may call him.

He is there for every single moment of his children’s lives and takes a lot of pride in his parenting. 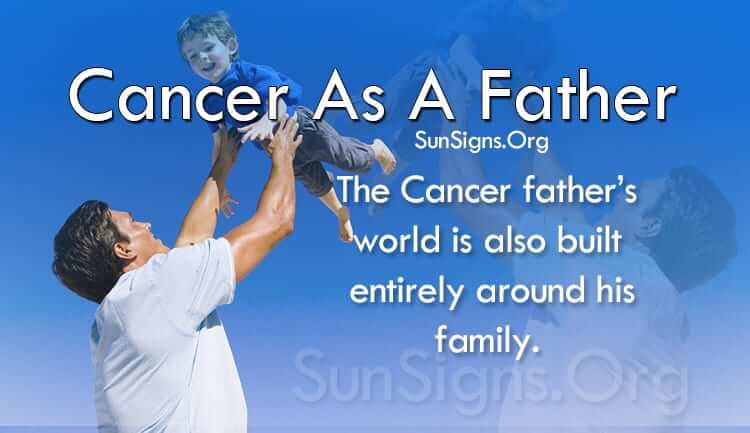 The Cancer male as a father traits show he is truly one of the best father figures around. He strives to never miss a moment of his children’s lives, no matter if it is good or bad. The Cancer father characteristics show that he wants to be there for them when they need a hug, someone to confide in or simply just to celebrate the good times and build fond memories with. He goes above and beyond what any normal father would do for his children.

Showing such diligence in parenting is a highly admirable trait to have and the Cancer man wants everyone to know it! His kind, nurturing and patient nature translates well with his children. Every day there is an overabundance of affection and love!

It is as if the Cancer dad personality is trying to make each day a wonderful celebration of life. Even when his children become troublemakers, he does not express any signs of harshness towards them. I don’t know if he can even muster any sort of negative emotion towards his family!

This Cancer parent’s method of discipline is to give them the cold shoulder; all the praises and the usual fun-loving father suddenly turns into a silent, emotionless person.

The Cancer father personality traits show that this is an especially effective way to approach discipline because of the shock and sudden change in personality and demeanor.

Success is the Key

Cancer fathers LOVE to fuss over every little thing in his children’s lives. It can be something as minor as making sure they finish their vegetables or as major as failing a test. The Cancer father has a strong desire to help his children succeed. He will sacrifice his own personal time to sit down with his children and tutor them extensively, if that is the necessary course of action.

Because he puts every single bit of time and energy into his family, he is usually unable to keep many friendships alive with ease. In a way, he isolates himself from everyone else (perhaps not on purpose!) and makes his family literally everything he has.

The Cancer dad personality will require some help from his partner to guide him towards maintaining his friendships a little bit better. There is only so much you can do for your family at once!

Top of the World

When it comes to parenting, the Cancer father characteristics show that he has a tendency to overcompensate. He wants to conquer the sport of fatherhood and beyond! He takes so much pride in everything that he does for his children and boy, does it show. Occasionally, he will get so competitive that he may cause some tension between him and his partner.

Cancer men tend to be in favor of their male children but will appreciate and respect a strong, independent female child as well. In general, he just wants his children to grow up to be responsible, upstanding adults!