Uranus in the Ninth House of the Natal Chart

What does Uranus in the 9th House mean? These people will not sit in one place for a second and are always ready for a new adventure.

The ninth House refuses to believe in boundaries, and Uranus allows you to think outside the box. Your love of learning is infectious, and people listen to your ideas, no matter how radical they may be. And that’s good because you want people to play devil’s advocate with your new theories. After all, Sagittarius is the ruling star sign for the 9th House!

Uranus is symbolic of originality, radical thinking, and innovation, and your ingenuity in the ninth House has no limits. Adding to your knowledge is what you do best, and no one or nothing can stop you from your quest. You aren’t surprised by anything and are very open-minded toward unique ideas and radical theories. You listen to the world philosophies of anyone willing to share them and are against any conventional wisdom. 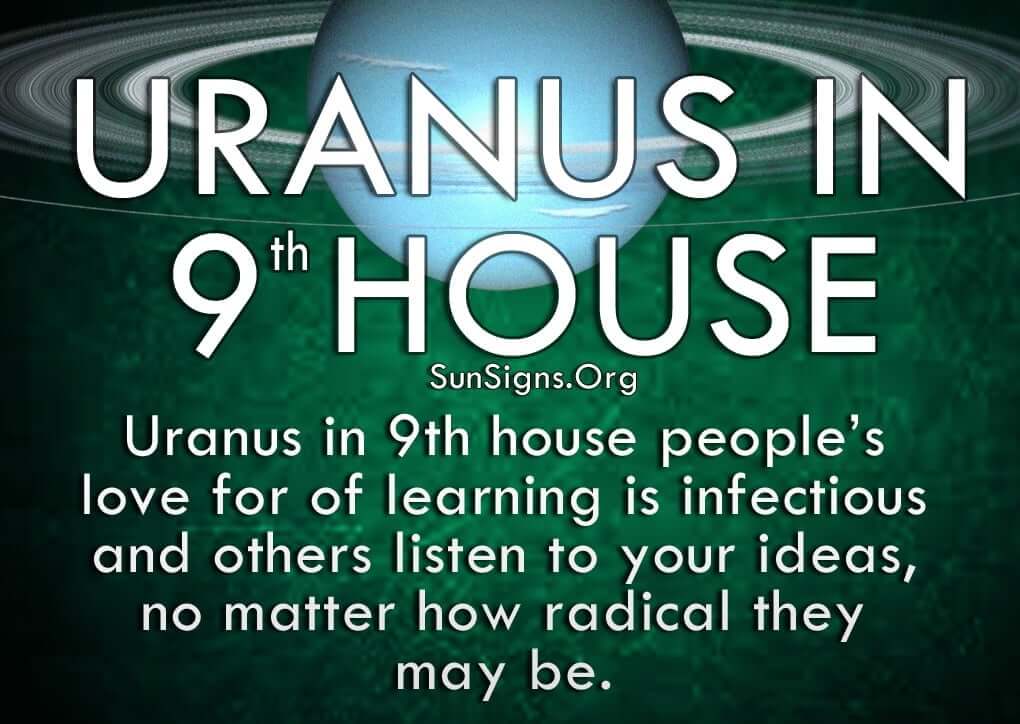 Uranus in the ninth house personality think traditional values are too conservative and always look for new beliefs and morals to study. This is why you love traveling and meeting new people. All of these new experiences paint a unique picture that eventually becomes part of your personality.

You love to expand your mind and your mannerisms to include original and thought-provoking ideas. Boring is not in your vocabulary, for you don’t have time to sit still and be bored. There’s too much going on in the world.

What you have to your advantage is tenacity. You refuse to believe that finding happiness is impossible, so you will do whatever it takes to achieve that end. There are no limits to your imagination, so you feel there are no limits on anything you want to do. You throw out conservative thinking for a more open approach, allowing you to take any new idea out for a spin. Find your Uranus sign to know more.

The thing that might be difficult for the Uranus in ninth House is balancing a career that will most likely involve travel with a marriage-type committed relationship. You have a large social circle. You enjoy going out over staying at home, and you meet new and interesting people all the time. This is ideal when you only care about dating, as you aren’t tied down to one person or place. But if you find a void because you want someone to come home to regularly, that is a tougher issue to handle.

Finding someone okay with you leaving at a moment’s notice (because you always come up with new ideas on a whim) is not an easy task. And finding someone who has the time and money to take off with you at a moment’s notice can be even harder. This is where you’ll utilize the creativity of Uranus in 9th House to come up with a solution. There is a way to have it all, but it won’t be easy.

Uranus was not used in astrology until 1781, when it was discovered. It was discovered during the French Revolution. It influences rebellion, revolutions, freedom, personal power, independence, science, and rapid changes. It is an outer as well as a generational planet.

Uranus is the higher octave of Mercury. It is the ruling planet of Aquarius, which Saturn formerly ruled. This planet also rules originality and innovations. Uranus in 9th House makes you strong-willed, independent, and confident.

Uranus in the 9th House Meaning

A natal Uranus in the Ninth House urges you to create your own reality. You tend to ask lots of questions where there seems to be a lacuna, hence coming up with your own philosophies. Uranus in 9th House careers do well because Uranus natives are persistent, curious, and purposeful.

What happens when Uranus is in the 9th House? This placement brings clarity into your life. It enables you to share different views about different topics with the world. With this planet’s influence on your life, you are always focusing on expanding your horizons.

Uranus in 9th House husband is dependable and reliable. You are always there for your family, no matter how busy you are. You create balance in your life so that you can spend quality time with your wife and child or children.

Uranus in the Ninth House and Freedom

Uranus in Ninth House makes you intelligent. With intelligence, you are able to free yourself from people out to dictate your life. Freedom always occupies your mind, and you tend to incline towards socialism.

Uranus in 9th House wealth comes easily to you because you are hard-working.

With Uranus in 9th House in your astrological chart, you have to be careful not to ignore ideas just because they have been around for a while. It’s because they have stood the test of time that they became good ideas. Don’t dismiss someone who seems to be too traditional in their thinking. Then, you will be as bad as those who dismiss an idea because it’s new.

Listen carefully and use your curious mind to your advantage. Ask relevant questions and decide for yourself if the older theories still have merit. Your ability to seek out new ideas is unmatched. But don’t let it overshadow great ideas that already exist.