However, even the wasp animal totem has important symbolic messages that we need to be conscious and aware of. It is an insect of the spring, and its symbolism reflects that. Order, progress and productivity, involvement, construction, development, and communication all go together hand-in-hand to bring about the beautiful changes during this season of new life. Spring is symbolic of the start of new beginnings and new projects, and the wasp plays a decisive role in this.

Across several cultures, the meaning and interpretation of the wasp’s messages differ a bit. Certain African traditions value this insect as the symbol of evolution and control over our own lives, while ancient European cultures focused on the wasp’s role in pollination.

Because of that role, they believed the wasp to be associated with fertility and praised it for enabling the continuation of other plants and animals. Similarly, to some Native American tribes, the wasp animal totem was even the creator of the Earth, symbolizing categorization, arrangement and productivity. 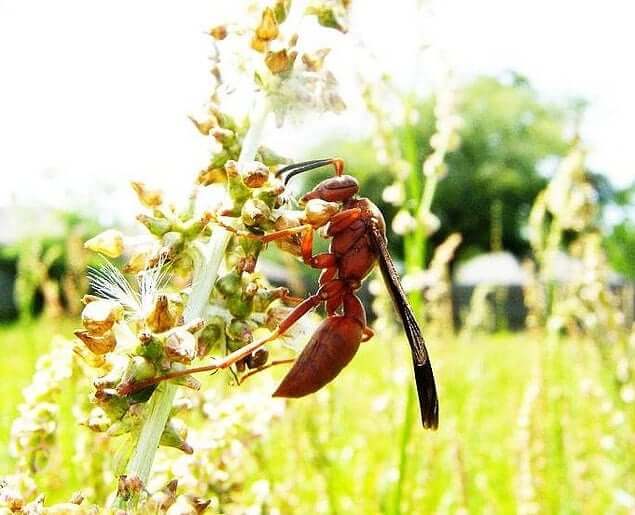 Although wasps can sometimes prefer to ride solo, they are also social beings that know how to communicate effectively. After all, communication is pivotal to success in many endeavors. The wasp spirit guide symbolizes that we should always express ourselves clearly to others in order to avoid silly misunderstandings and confusions that can delay progress.

The wasp spiritual totem reminds us to put ourselves in check and remain focused, making sure that all elements of our lives are in order so that we may achieve our highest potential. In order to live life in this manner, we must be conscious and dedicated to acting in a timely and efficient manner, not falling victim to procrastination and preventing others from creating roadblocks along the way.

The wasp is a strong insect, thus preferring to present itself to individuals who can act as leaders. As an independent thinker who is goal oriented, you allow nothing to get in the way of your intended plans. If you are a wasp person, you must be comfortable in both social situations and on your own.

Having the gift of communication and bluntness enables you to be expressive with your thoughts, regardless of how they might “sting” others. Relationships are not necessary to your functioning, and you are OK with that. You will simply do your own thing, writing your own story, whenever and however you want to.

Dreaming of a wasp is not uncommon, but you must pay close attention to the specifics of the interaction with the it. Killing a wasp in a dream signifies your ability to stand up fearlessly for yourself: for your rights, your desires, and your opinions.

The wasp symbol can give you a much-needed confidence boost to stand tall and hold your ground against any opposition. To be stung by a wasp, however, is a different story. This occurrence signifies the need to closely examine what is going on around you.

In this case, it is crucial that you consider any potential repercussions of former actions and choices. Could they be coming back to bite you? If so, prepare yourself. On a more pleasant note, dreaming of a mother wasp building her nest is a symbol of productivity and signals that you may soon be seeing major success in the pursuit of your goals.

When a wasp spirit guide comes buzzing into your life, you must interpret it as a friendly reminder that simply thinking about your dreams without acting on them will not make them a reality. Nothing will enable you to see progress, results, and/or change quicker than getting the ball rolling yourself.

If you have a dream, formulate a realistic and doable plan that you can stick to. Keep working, making only positive steps toward toward the goal, and allow nothing to get in your way. Dig deep within yourself and call upon the wasp’s spirit animal totem’s symbols of insistence, feelings and action.

The wasp meaning also encourages you to remain tough and strong in this process, for resistance to change is sabotage. In order to achieve success, you must be able to allow yourself to believe that all things are possible. By living by this mantra, the wasp tells you that you can be the best “you”.