What Is A Ouija Board?

What Is A Ouija Board?

One of the most well-known and culturally reviled metaphysical tool is the Ouija board. Made famous by multiple horror films and folk lore, and yet mass-produced by Hasbro, the facts about the Ouija board and how it works get lost in all the noise. This article will seek to help clear things up.

Practically speaking, a Ouija board is a spiritual conduit used in the transference of information between the spirit world and the mundane world. Specifically it is a form of communication related to automatic writing. In some of it’s earliest manifestations, it was not a board with letters, but a shallow pan filled with special incenses and ritual ashes that the communications were revealed in. 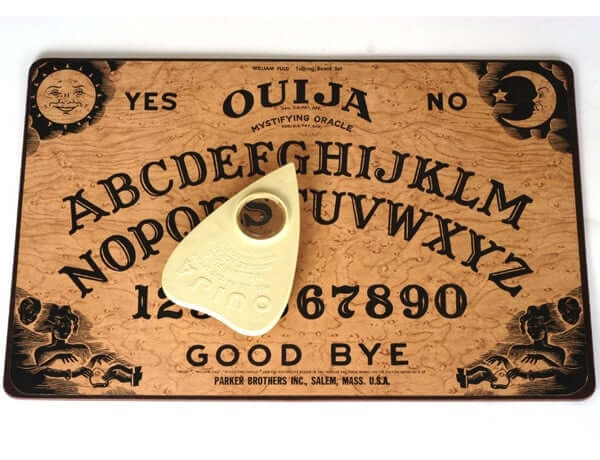 The origin of the Ouija board is somewhat cloudy, the popular version being the product of the entertainment industry creating board games to be distributed throughout the public. At it’s core, it is a flat board marked with yes, no, numbers, and the letters of the alphabet, and a device known as a ‘planchette’ which bears a clear window, and three felted feet and is used for interacting with the board/spirits.

The board can be used either together, or alone, and it’s implementation is quite simple. A single person, or a group of people sit around the board, and place their fingers on the plachette, and then the séance process begins. Most commonly one will begin with either asking if a particular spirit, or any spirit in particular is present to communicate.

The reputation for danger comes through the idea that the Ouija board serves as a doorway for unwanted and malicious spirits. This is possible, of course, but only without proper preparation and respect for the ritual you’re about to perform.

Anytime someone is communicating with spirits, especially if the method of communication uses a human medium, there is a danger of attracting something malignant, and that thing taking advantage of the open conduit to stay behind.

Significant persons from history were tied to the Ouija boards, and especially in the literary and music field there was much attachment. William Yeats claimed that his poetry was inspired by interaction with a Ouija board, the band name Alice Cooper was originally claimed to have been inspired from it, and at least one novel is claimed to have been written by automatic writing by the same.

In closing, the Ouija board is a useful tool used by mediums, or those desirous of being mediums, in communication with ghosts, spirits, and other entities not of this plane. With care and preparation, and a modicum of common sense, one can use the Ouija effectively and without danger. But remember, you are dealing with the spirit world, and not everything out there is human, let alone nice. So proceed with caution!