Like all things in life, numbers hold great significance. They are truly unique in that they are completely orderly and law-abiding, with functions that are undeniable. As organizers, they function in specific, logical ways and never change. Numbers are thus simple, yet extremely complex all at the same time.

Single digits in numerology are associated with specific meanings and, when combined together to form larger numbers, those varied meanings are merely amplified…usually.

There is, however, a special case with a certain number: the triple six. This number happens to have Biblical origins that are difficult to stray away from.

Symbolism Of Number 666 In The Bible

Throughout the Bible, number 666 is referenced with specific, yet differing intent. For example, 666 is the number of talents of gold that Solomon collected each year in the Old Testament. Other references include the name of the sixth-century king of Babylon, Nebuchadrezzar, and the number of Adonikam’s descendants who returned to Jerusalem and Judah from the Babylonian exile.

Furthermore, the Book of Revelation in the New Testament asserts that this number is the “Number of the Beast”, an antagonistic creature that appears frequently in the apocalyptic vision. However, a more common meaning of 666 in modern culture sees it as a representative of the devil, meaning it was perceived as an evil number.

These Biblical interpretations have withstood the test of time in both Judaism and Christianity. However, they are not the only ones that we can consider. 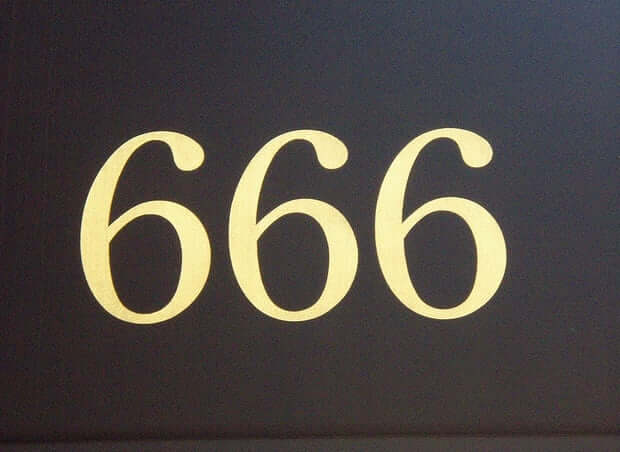 Other Symbolic Meanings Of 666

The 666 is identified in many other realms, as well. When examining its physical structure, we can see that it, like the “nine”, is shaped like a spiral, which is a highly symbolic symbol itself. Spirals refer to journeying from one’s center (or soul) outward while never forgetting the core of the self.

Specifically, spirals map our consciousness or awareness and its ability to extend outward from within while maintaining its connection to the source. This source can be one’s own soul or a higher power: a deity or divinity.

Furthermore, the image that is produced when a spiral is created mimics that of a maze or labyrinth, which can be indicative of our personal journeys through life and the decisions that we all must make regarding the directions we will take.

In these mazes, you either start in the center and must find your way out or vice versa. Spiritually, this can represent either a branching out of the soul (999) or a return to one’s beginnings (666). Put more simply, these numbers act as each other’s counterparts.

While the 666 symbolizes the retrograde part of one’s consciousness and soul pulling back to its origins and roots, the number 999 signifies a progressive edge that is ever-wiling to expand and create. Although they are opposites, though, they do share the common theme of being presented as a triple digit.

Threes are considered lucky numbers with much symbolism attached to them, mainly that they work to keep one balanced. Think of a triangle, with two support beams and one foundation. This is only of the many themes that work in sets of three.

There are a seemingly infinite number of trifectas that have developed and been continued to be used throughout history: Father, Son, Holy Ghost; past, present, future; etc.. Most importantly, threes have the ability to create.

Whether you are examining the ability of the 666 meaning to create in order to counteract imbalance or the 999 creating outward momentum, these triplicates are proactive creators. To tie this back to religious ideas, it seems appropriate to deem these counterpart numbers as representatives of the balance of light and dark, good and evil.

Although they are certainly counterparts, even in their physical written design, it is important to remember that the single digits within each number have individual meanings that must be explored. When you look at the unique symbolism of each number, these numbers tend to speak of harmony.

In popular numerology readings, the six is governed by Venus, the planet and goddess of creativity and passion. Her energy is primitive in that it reconnects to its internal source via animals, plants, and sex. Thus, the energy of six comes back, once again, to balance.

Nines, on the other hand, are ruled by the planet Neptune, who speaks of expectations, the expansion of consciousness, and developing one’s thinking to be long-term. It is also though to emit a powerful, universal influence over intuition and consciousness, making it the seeming embodiment of Christ and his character traits.

No matter which way you choose to approach the symbolic meaning of 666 (and the 999, as well), it is important to remember that they are both similar and different, alike and unique. However, all of their harmonious qualities can refer back to their familial relationship with the lucky number three.

The narrative of these numbers seeks to keep the universal balance on both an individual and societal scale by uniting all consciousnesses, whether it be human, animal, plant, or celestial.