The kangaroo spirit animal is a strange little creature. It looks something like a huge rabbit that stands upright. These creatures are only found on the island continent of Australia, and of course, in zoos around the world. Because of this, it would make sense that the symbolism for the animal comes mainly from Australian astrology.

This kangaroo’s symbolism comes mostly from the creature’s actions and appearance. But certain Australian legends and myths also help to contribute to this strange animal symbolism. The kangaroo even has symbolism in dreams! Keep reading to find out more about kangaroo animal totems!

Kangaroo spirit animal reveals that what really matters at the end of the day is that your loved ones are well and in good health. Keep doing your best and stay thankful for all that you have. Embrace every blessing that comes your way. There is nothing important in life than being surrounded by people who understand you.

This animal is always passionate about improving its relationship with others. Kangaroo meaning indicates that you should keep trusting the people you share relationships with. Stay together and do not give up on each other. Being there for one another makes your work easier.

The kangaroo spiritual totem does have a softer side to it as well. While the adult kangaroo may seem tough and wild, its baby, the joey, is much more vulnerable. The joey cannot do much on its own and relies on its parents for everything, much like human babies. The kangaroo carries around the joey in a pouch near its stomach.

Kangaroo totem reminds you to stay away from people who provoke you until they bring out your ugly side. Your life should never be full of anger. Stay calm so that you can think in a better manner. Live your life one day at a time. Sometimes people will come into your life temporarily to teach you permanent lessons.

This creature carries the energy of living harmoniously with others. Kangaroo animal totem signifies a peaceful coexistence with neighbors. Do not be fond of hurting people around you. Upsetting people around you is one way of ruining your mood. Stop caring so much about what other people think about you. Enjoy your freedom by bringing out the best in you.

It’s this animal’s energetic way of life that would tire out most humans. This can be a great motivator for humans as well. It almost seems like a joke that a kangaroo could have more energy and stamina than a person, which could help motivate a person to work harder to be more like the mighty kangaroo.

Kangaroo symbolism teaches you that when you fall asleep with a dream, always wake up with a purpose. Try to put everything in your mind into practice. You will only achieve your wishes if you work them out. Do not tolerate laziness in your life and start working for your goals. 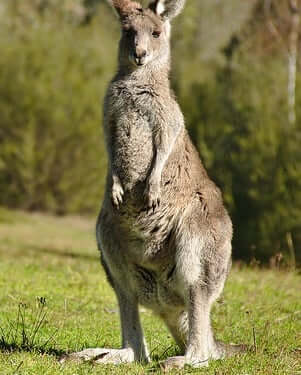 The adult kangaroo is a tough animal. If it were a person, it might be a boxer or other professional athlete. These animals are anything but lazy and dull. They seem to be always moving unless they’re napping, of course. This quality of movement is one of the things that can help to define this animal’s symbolism. There is no doubt that this creature gets its workout for the day.

The kangaroo is a powerful and fast animal. It can easily hop around faster than the average human can run. Because of this animal’s natural strength, it is an obvious symbol of strength. Because of its speed, it also makes a great symbol for stamina. This creature always seems to have the energy to get things done.

It also adds a new symbol to the mix, though. The kangaroo animal spirit does a great job of symbolizing the fight or flight instinct that humans have. It also shows the nature of life, death, adaptability, survival, and quick-thinking. These are all traits that we humans have, and because of that, it is easy to see ourselves in the wild kangaroo.

Legend says that the kangaroo was blessed with a pouch to take care of its baby when it proved to be the most kind-hearted animal on the continent. The kangaroo then went around the gave other animals pouches to protect their children because the kangaroo’s parental duties are a great symbol for family, nurturing, and protection.

If you dream of a kangaroo, it refers to the maternal instincts of the kangaroo if you have children. If you do not, then it could symbolize your inner anger or indecisiveness. Whichever one matches your personality better would be what you would have to change to stop having dreams with kangaroo meanings in them.

As you can see, many of the dream symbolism with kangaroo symbols matches well with the other meanings of the animal. The kangaroo’s traits match along well with that the traits that humans have. Since we can see so much of ourselves in these animals, we can also learn from their symbolism.

Seeing a kangaroo meaning illustrates that there are times when you will not have everything you want. Learn how to be thankful for all you have. You should be contented with what you can afford. If you want expensive kinds of stuff, work hard for them.

Aboriginal people in Australia find kangaroos to be culturally and spiritually significant. Until today, they consider the kangaroo’s meat to be a staple source of protein. They used pelts to make clothing and rugs and their skin to craft water bags.

What are Kangaroo Dreams?

Kangaroo appearing in your dream tells you that you should not make it a routine to please people. Do not change who you are so that you can fit in other people’s lives. Kangaroo symbolism assures you that the right people will love you if you be yourself and live your life.

Kangaroo spirit will always teach you to have a beautiful soul that will never change. Learn to work in silence while calculating your strategies. Live in this world cautiously without allowing the ills of this world to live inside you. Stop allowing silence and ego to kill your relationship.

The kangaroo animal totem isn’t an animal that is fearful of the rest of the world. The kangaroo spirit guide has little to no natural predators because of its size and speed. Therefore, this animal has little to be afraid of anything. To say the least, the kangaroo wouldn’t back down from a fight, and it wouldn’t be unlikely if the animal were to start one either. Of course, if the animal needed to, it could easily run, or in this case hop, away from a fight as well. This helps to reinforce the animal’s symbolism for speed and strength.