Leo is the fifth sign in the zodiac, and represents those born between July 23 and August 21.

The name is Latin for lion, which is an apt one for those born under this sign are natural made leaders. Ruled by the Sun, they are always the center of attention and the brightest stars in any room.

Leo sits in the 120-150th degree of the zodiac between Cancer and Virgo. It is one of the earliest recognized constellations, with mentions in Mesopotamian, Persian, Turkish, Syrian, Jewish and Indian cultures.

They all had different names for it, and they all meant lion. In Egyptian mythology, Sekhmet was a warrior goddess who was depicted as a woman with a lion’s head. She was considered a Solar deity matching the ruling planet of the Sun for Leo. 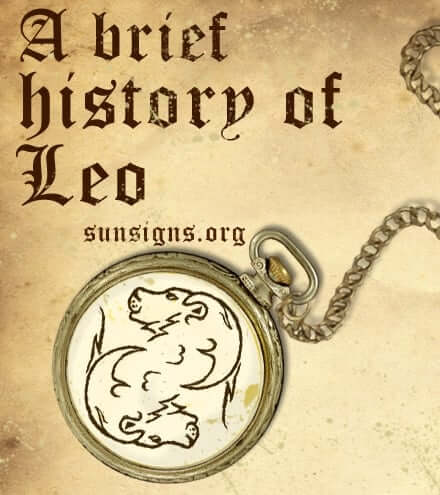 Ancient Greek mythology recognized it as the Nemean Lion that would take women back to its lair and lure warriors in to save them. But he was impervious to weapons, so the Greek hero Heracles knew he had to use his bare hands.

So he grabbed two of the lion’s legs and snapped it in half, freeing the captives. Zeus commemorated the event by placing the lion figure in the sky. This is the most well-known myth for the Leo history.

The other aspects of this zodiac sign, the fire element and the fixed modality, have to do with how nature has been broken down into different entities. Leo falls right in the middle of summer, generally the hottest days of the year.

This is a fixed period for nature, in-between the rebirth and planting of spring and the harvest of fall. Thus the Leo sun sign person is strong and stable, but also hot like its season. They are fiery in nature and extremely passionate, harkening back to Greek mythology and the force to be reckoned with.

There are additional traits associated with the Leo person, including the heart for anatomy, gold for the metal, and gold or orange color. Being ruled by the Sun, the color can either reflect the color of the ruling planet or the color of the lion’s skin.

And since those of this star sign are seen as bold and courageous, their brave hearts are what get the most attention. And the metal goes along with the anatomy, coining the phrase “heart of gold.” Leos are very generous people, and will fiercely protect the ones they love.

But just as the warrior is filled with hubris, so too do Leos have a large ego. They need to be fawned over and given as much attention as possible to remain happy and harmonious. Everyone has to be aware of the claws that can come out followed by a ferocious roar.

But those who serve the king of the jungle are handsomely rewarded with his love and affection. The Lion is simply looking for those who will survey the plains with him and go off on endless adventures. For in his season, the sun is high, the birds are chirping, and everything is just as grand as he is.