Gemini is the third sign in the zodiac, and represents those born between May 22 and June 21.

The name is Latin for “twins,” which matches the dual personality of those under this sun sign. They are ruled by the planet Mercury, messenger of the gods, explaining why they are great communicators.

The Gemini astrology sign exists in the 60-90th degree in the celestial longitude, and the constellation sits between Taurus and Cancer. The symbol of the twins comes from Greek mythology and the story of fraternal twins Castor and Pollux.

Pollux was the son of Zeus and Castor was the son of Tyndareus, king of Sparta. It’s said when Castor died Pollux begged Zeus to give him immortality. He did, by uniting them together in the heavens. The twin names are also the names of the alpha and beta stars in the constellation. 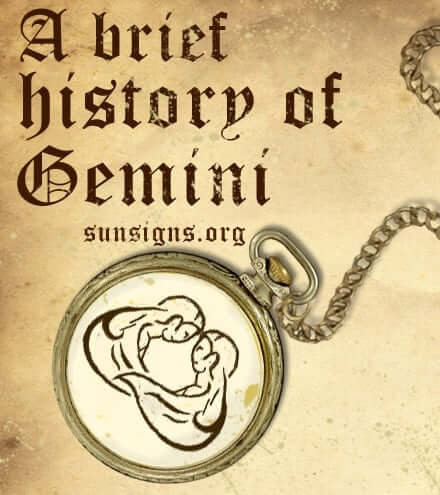 The earliest known reference to the constellation was by Aristotle. And in Babylonian astronomy, the stars were known as the great twins and regarded as minor gods. But the names of these people were Meshlamtaea and Lugalirra, meaning respectively “The One who has arisen from the Underworld” and the “Mighty King.”

This star sign is also an air element and a mutable modality. Gemini is found at the end of the spring, when the season is about to change to summer. This is why those under this zodiac sign are easily adaptable to their surroundings.

And as air signs that are ruled by Mercury they are most concerned with the quest for knowledge. Because of this, they are known for their flights of fancy and ever-changing nature, as they can’t stand still for too long. Mercury was known as a god of traveling, as well as communication, good luck and fortune. Those who are Gemini have a very optimistic outlook on the world and want to discover all it has to offer.

Other zodiac characteristics have been attributed to the Gemini sun sign, and the anatomy associated with them is their hands, arms and lungs. They are constantly moving and reaching out to obtain more information and tell as many people as possible about their new findings.

The color associated with them is yellow, signifying the coming sun that will sit in the summer sky once the new season has landed. And their metal is mercury, the one named after their ruling planet. It can also be melted down to flow like liquid.

Those born as Gemini twins straddle the divide between the changing seasons, making them two sides of the same coin. They represent the shift in nature between planting and nurturing the crops, and are blown around by the changing winds. Luckily, they can adapt to whatever comes their way by switching personality traits at the drop of a hat.

The Twins move as swiftly as the Roman god they are associated with, and offer great wisdom to improve the transitional period they are born into. While others may be confused by their instability, those who know them realize it’s the only way for their dual personality to reconcile their constant mantra, “out with the old, in with the new.”