The eleventh sign of the zodiac, Aquarius, applies to those born between January 21 and February 19.

Symbolized by the water bearer, Aquarians are known to be bright and unique. Ruled by Uranus, god of the sky and heavens, it’s no surprise they often have their head in the clouds.

This sign sits between the 300 and 330th degree in the zodiac between Capricorn and Pisces. It is a very large constellation and is one of the oldest recognized in the zodiac. According to the Babylonian star catalogues it’s known as “The Great One.” It represents the god Ea, who was often shown carrying an overflowing vase.

Old Babylonian astronomy considered Ea the ruler of the southernmost quarter of the Sun’s path, or the middle of winter. For the ancient Egyptians, Aquarius was associated with the annual flooding of the Nile, when Aquarius put his jar into the river signifying spring.

For the Greeks, the constellation was seen as a vase that poured over the neighboring Pisces constellation. Other myths say he was a cup-bearer to the gods. 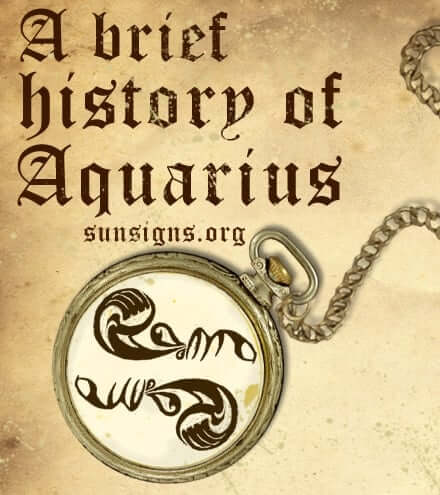 A well-known story associates Aquarius with Ganymedes, a young boy who was carried off by an eagle to become cup-bearer to Zeus. Some say he was the most beautiful boy Zeus had ever seen, which is why either he sent an eagle or he was the eagle who kidnapped him.

Incidentally, as with many of the other constellations, it was said to have been Zeus that immortalized the cup-bearer by placing him in the sky.

The other aspects of the Aquarius sun sign are the air element and the fixed modality. The dates of Aquarius fall at the height of winter, when there have most likely been several storms and people are struggling to keep up with the harsh weather.

It is a fixed place in the season, when people are already settled in their safe and sound structures. They will go through whatever creative methods necessary to survive the cold.

This is why Aquarians think of the most unusual ideas and are always trying to better the world. They want to improve the bleak situation they were born into and improve upon their techniques for next year.

Besides their airy nature, other zodiac personality traits have come to be associated with the sign Aquarius. For anatomy they are said to rule the ankles, shins, and circulation. For metal they have uranium and their color is sky blue.

The lower leg helps the Aquarius to push off and jump into the sky where they want to soar and discover new ideas, while blood circulation is necessary to maintain this flow.

Uranium comes from the name Uranus, the ruling planet, and sky blue represents the same desire to metaphorically fly in the heavens looking for more knowledge.

The Water Bearers care about open minds, open dialogue, and room to grow, leaving the sky as their best representation for how far they will travel to make this a better world. For this sign, it is always the age of Aquarius!