If you are born between November 23 and December 22 you fall under the ninth sign of the zodiac, Sagittarius.

Symbolized by the archer, Sagittarians are known to be flighty and adventurous. Ruled by Jupiter, king of the gods in Roman mythology, they are blessed with a wealth of knowledge.

Sagittarius sits in the 240-270th degree in the zodiac between Scorpio and Capricorn. The sign is symbolized by the archer or a centaur, which is half human and half horse.

According to Greek mythology Sagittarius is a centaur. Now, there exists another centaur constellation, Centaurus, who is believed to be named Chiron. And some say Chiron created the constellation Sagittarius to guide the Argonauts in their quest for the Golden Fleece.

But another Greek myth says the archer is not a centaur but instead is Pan’s son, the satyr (a creature with goat-like features) Crotus. It was said that Crotus often went hunting on horseback and lived with the Muses, who were goddesses of inspiration.

It is through them that Crotus came up with the idea to use arrows to hunt. So they asked Zeus to put him in the sky, where he looks to be in the position of practicing archery. 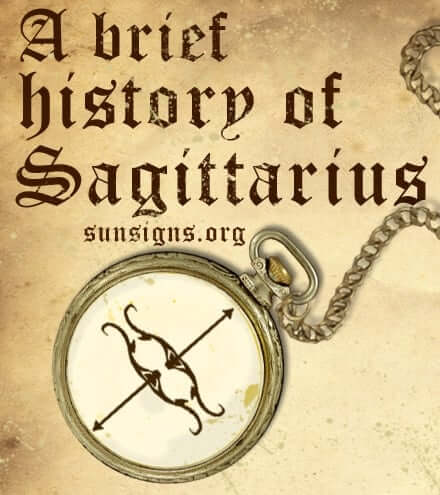 The ancient Babylonians had a god, Nergal, often shown to have wings and two heads, one panther and one human, as well as a scorpion’s stinger above a horse’s tail.

The position of the constellation among its neighbors shows his arrow pointing towards the star Antares, the “heart of the scorpion.” Sagittarius looks ready to attack Scorpius, perhaps to avenge the slaying of Orion by the scorpion of Greek mythology.

The other aspects of this zodiac sign are the fire element and the mutable modality. Sagittarius is the final month of fall, right before the harsh winter sets in.

It is a period of transition between the seasons, when people are getting ready for colder temperatures and difficult weather conditions. They have to adapt to whatever Mother Nature throws their way, which is why Sagittarians are so flighty.

They are caught up in a natural survivor mode and have to rush around to get things done outside while the weather still allows it. And with all of their energy they are naturally fiery and always on the move.

Other characteristics associated with Sagittarius sun sign are the hips, thighs and muscles for anatomy, tin for the metal and turquoise for the color. Their legs and muscles are what keep them constantly on the go.

Tin is a thin malleable metal that can be bent and molded to suit whatever it is needed for. And turquoise can represent either the blue of the sky, the blue of the oceans or both. Sagittarians will roam the earth and the sky to find all possible knowledge.

As it was with Jupiter, who ruled over all he surveyed, Sagittarians will go and do whatever it takes to achieve their goals. With all of the history and chaotic nature surrounding the Sagittarius astrology sign, it’s no wonder that those who fall under it are busy and adventurous people.