Those born between February 20 and March 20 fall under Pisces, the twelfth sign of the zodiac.

Symbolized by two fish swimming in opposite directions, they are dreamers who often have trouble focusing on reality. Ruled by Neptune, god of the sea, their emotions can sometimes confuse their better judgment.

Pisces sun sign falls between the 330 and 360th degree in the zodiac and sits between Aquarius and Aries in the sky. The constellation is not very bright, but the star Alpha Piscium roughly translates from Arabic as “the cord”.

Ptolemy, who is largely responsible for our current understanding of astrology, described the star as the point where the cords joining the fish are knotted together.

The symbol of the two fish was found as early in history as 2300 B.C., and the constellation is one of the earliest zodiac signs on record. 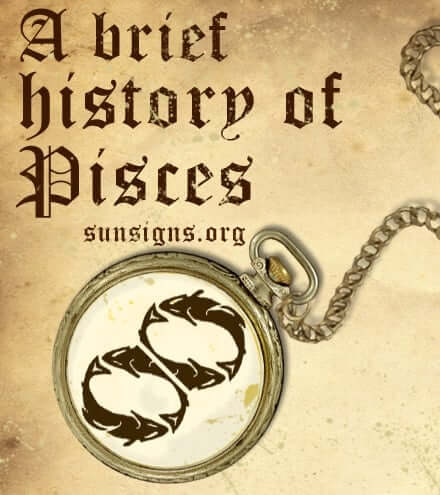 According to Greek mythology, Pisces refers to the fish that Aphrodite and her son, Eros, changed into to escape Typhon, a great monster. Another version of that myth claims a fish carried them out of danger.

Yet a third story claims Aphrodite was born of an egg that fell into the Euphrates River and was rolled to shore by a fish. Thankful for the rescue, Aphrodite placed the fish in the night sky.

And beyond these myths, there are some who equate Jesus Christ with the symbol of the fish for the miracle of multiplying the loaves of bread and fish. His birth is also said to have happened during the spring equinox which falls within the Pisces dates.

The other aspects of this star sign are the water element and the mutable modality. Pisces falls at the end of winter, when the temperatures are not so cold and the weather conditions not so harsh. It is a transition between the hibernation and death of nature and its creatures and the rebirth of spring and new life.

Being the tail end of the season, people are looking out their windows and seeing the snow melting and the ice thawing. This allows them to be hopeful and dream of warmer days and playing outside. This is where the Pisceans get their dreamy nature.

Over the years other traits have come to be associated with the Pisces astrology sign, including the feet and veins for anatomy, tin for the metal and sea green for the color.

If the head is the anatomy for the first sign of the zodiac, Aries, it makes sense for feet to be the anatomy ruled over by the last sign, Pisces. And tin is a light metal, representing the many airy ideas of the Pisces dreamer. And the color is obvious, representing the seas where the fish resides.

With a history so steeped in water and tides, it’s no wonder the Pisces person is so sensitive and intuitive. They see people for who they really are because of their deep, nurturing souls. And with their ability to go with the flow, they enjoy swimming in the vast ocean of spiritual enlightenment.