People born between June 22 and July 22 fall under the fourth zodiac sign of Cancer. This star sign is ruled by the Moon, which affects the tides of the ocean.

And since this is a water element, those who fall under this sun sign are governed by their feelings and constant mood swings.

Cancer spans the 90-120th degree of the zodiac, and sits between Gemini and Leo in the sky. It is the Latin word for crab, which is the symbol of this astrological sign. The Greek mythology behind the crab stems from the story of Hercules fighting Hydra.

The crab Karkinos bit Hercules on the foot and he crushed it. That’s when Hera, an enemy of Hercules, placed the creature among the stars. In other cultures the crab has been described as different but similar creatures, including crayfish, lobster, and water beetle. 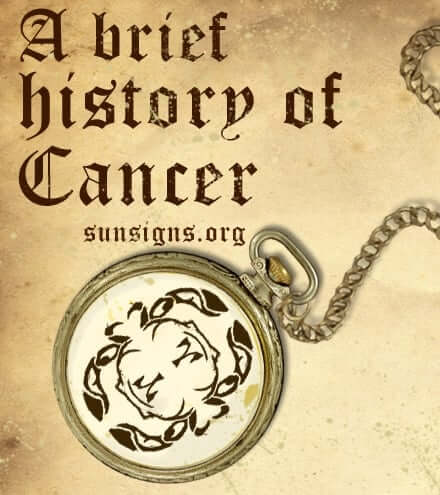 In ancient Babylonia, they called one of the stars in the constellation “the southeast star in the Crab,” and this is the image that has stuck throughout history. The constellation itself is one of the dimmest that exists, but in ancient times it’s said to have been the Sun’s highest position in the sky for the summer solstice.

Because of this placement among the seasons, Cancer symbolizes the beginning of a new season, summer. The beginning of any season is constantly changing, and this is represented by the Moon’s pull on the ocean. Just as the waves ebb and flow, so do the emotions of the Cancer person.

Through the years the Moon has come to reflect the opposite nature of the Sun, and is associated with intuition, creativity and introspection. It helps continue the flow of energy in conjunction with the Sun, which is why those born under Cancer star sign are concerned with helping others and providing support.

Also, the Moon appears to be in constant transition in the sky, for we only see certain parts of it depending on its placement in relation to the position of the Earth and the Sun. Because of this, it is the aptly named ruler of this zodiac sign.

The other aspects of this sign, the water element and the cardinal modality, have to do with how nature has been categorized. Cancer’s symbol and attachment to the Moon are obvious indicators of a water sign, and the beginning of a new season such as summer symbolizes action.

Other astrology personality traits associated with Cancer sun sign are the breasts and stomach for anatomy, white or yellow for color, and silver for metal. The color comes from the Moon’s appearance to us here on Earth, while silver gives off a similar glow.

As for the anatomy, this is symbolic of motherhood and sustenance. Cancer is usually concerned with the home, since the crab is always carrying it on its back, and they strive to maintain a caring and nurturing environment for themselves and those around them.

Because of this emotional attachment to everyone and everything, they work hard to provide what’s needed for a happy and healthy existence. The summer is here, and The Crab is ready for bright skies and beautiful sunsets.