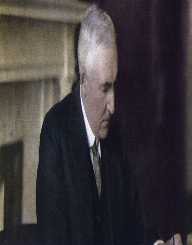 Born on November, Warren G. Harding was an American politician and became the 29th president of the country. His administration spanned fromMarch 24, 1921, toAugust 2, 1923, when he died. Warren G. Harding became one of the most revered and famous presidents the Americans ever had only for his reputation to be damaged by the discovery of scandals that happened under his administration. Some of the scandals include the Teapot Dome and an extramarital affair. The once popular president is currently rated among the worst in historical rankings of United States presidents.

Before assuming the office as a president, Warren G. Harding served a four-year term in the Ohio State Senate from 1899 and served as a lieutenant governor in 1903. In 1914, Warren G. Harding was elected to the U.S Senate after failing to capture a governor position in 1910. Warren G. Harding died of a heart attack just two years into his administration during a western speaking tour.

Warren G. Harding was born on November 2, 1865, in Blooming Grove, Ohio to George Tryon Harding Sr and Phoebe Elizabeth. Warren G. Harding was the first child of eight siblings. There were claims that the Harding’s had African-American descendants in respect to their great grandmothers. The rumors never died off easily, and after Warren Harding’s death in 1923, the African-American community claimed him as one of them. However, the claims were refuted by his great grandfather, and in 2015, a genetic test done on Harding’s descendants with 95 % accuracy revealed that Warren G. Harding lacked sub-Saharan African ancestors within four generations. The family later moved to Caledonia, Ohio.

Warren G. Harding was educated at the Ohio Central College in Iberia in 1879. While in school, Warren G. Harding and his friends set up a newspaper, Iberia Spectator meant for the school and community. Harding had foreknowledge in the newspaper establishment since his father, Tryon owned The Argus newspaper. After his graduation in1882, Warren G. Harding joined the family in Marion Ohio.

After graduating from high school, Warren G. Harding picked up jobs like teaching, and later as in insurance man. He then attempted to study law, but that also proved futile. With his interest in newspaper publication, Warren G. Harding saw the need to save The Marion Star newspaper, from folding up and therefore collaborated with some friends to purchase it at $300. In 1884, Warren G. Harding left Marion to attend the Republican National Convention to support the presidential nominee and former Secretary of State, James G. Blaine.

Warren G. Harding was at the time working with the Marion  Democratic Mirror and had to write in support of the Democrat presidential candidate, Grover Cleveland who eventually won the elections. Upon his return from the campaign to Marion, he released The Marion Star has been reclaimed by the sheriff, but with financial support from his father, Warren G. Harding retrieved it. Warren G. Harding was able to bring The Star back to its feet and made it a powerful local newspaper. With the success gained he ventured into investments by purchasing stock in local businesses.

Warren G. Harding finally gained the nod to contest in 1910 on the ticket of the Republican. However, due to the intense division in the between President Taft and former president Roosevelt, Warren G. Harding lost the elections to the incumbent Judson Harmon. The rift between the party would later cost the in the 1912 presidential elections.

During the 1914 Senate election, Warren G. Harding was encouraged by his good friend and campaign managerDaugherty to ran in the contest. Warren G. Harding had met him during a visit Washington early days in his career. He then contested for the republican against Foraker and won with a margin of over 12,000 votes for the Republican slot. His main contender in the general election was Ohio Attorney General, Timothy Hogan but he seemed not be a match Harden as the results were announced. Harding had a landslide victory with over 100,000 votes and made it to the US Senate. Warren G. Harding diligently served in that capacity making him gain of recognition and a rise in the political ladder. He was made the temporary chairman during the 1916 Republican National Convention.

Warren G. Harding skeptically announced on December 17, 1919, of his decision to contest for the Republican presidential slot for the 1920 election. With the death of former president Theodore Roosevelt who was the most likely to have the slot, many other candidates, including Governor of Illinois Frank Lowden, General Leonard Wood, and California Senator Hiram Johnson showed up. Once again, Daugherty became his campaign manager and ensured Warren G. Harding became an acceptable figure. After a stiff contest characterized with a lot of controversies, Warren G. Harding won the presidential nomination and subsequently won the general election and was sworn in onMarch 4, 1921, as the 29th president of the United States of America and his vice being Calvin Coolidge.

Warren G. Harding’s domestic and foreign policies made him very popular and revered. His introduction of the tax cut, modernization of America through technology and civil rights were just the right policies to tackle the problems at the time. However, a scandal that happened in his administration coupled with an extra-marital affair which was revealed after his death dent his image and his reputation was destroyed.  Although aside the extramarital affairs which were linked to him personally, all other scandals like the Teapot Dome, scandals in the judiciary, and several other which were initiated by some of his incompetent appointees caused him greatly.

On July 8, 1891, Warren G. Harding was married to Florence Kling, a daughter of Amos Kling, a local banker, and developer. Florence at the time was a divorcee of Pete deWolfe and had a child named Marshall. She earned a living as a piano teacher. The couple had no child, but Florence got involved in all businesses and investments of Warren G. Harding. After suffering series of heart attack and other ailments, Warren G. Harding died on August 2, 1923, at age 57. Warren G. Harding twisted convulsively and collapsed while Florence was reading to him. All attempts to resuscitate him proved futile.