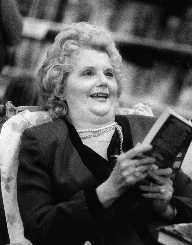 Better known as V.C. Andrews, Cleo Virginia Andrews was an American Novelist. The author is best remembered for Petals on the Wind, If There Be Thorns, Gardens of Shadows and Flowers of the Attic.

V.C. Andrews was born in Portsmouth, Virginia on 6th June 1923. She was the last born child of Lillian Lilnora and William Henry in a family of three children. Throughout her childhood, she attended the Southern Baptist before later moving to the Methodist church.

During her teenage, V.C. Andrews fell from a school stairwell. As a result, she suffered severe back injuries. A procedure that was intended to correcting the injuries resulted in crippling arthritis.

Her condition forced her to use crutches and at times a wheelchair for the rest of her life. Despite this challenge, she completed a four-year course from her home.

After completing her course, V.C. Andrews soon became a commercial artist. Using her art proceeds, she helped her family since her father had died.

Virginia Andrews later decided to try writing since he felt artistry was not satisfying. Her first book, Gods of Green Mountain was science fiction. The book, however, remained unpublished in her lifetime despite releasing it as an e-book in 2004.

Despite her success in her artwork, V.C. Andrews felt she was not gaining much from it. This pushed Andrews to try his luck in writing. She published her first book in 1979. Flowers in the Attic, it was drawn from the fictional worlds she had learnt during her childhood.

Despite receiving a negative review from the critics, the book performed exceptionally well commercially. It became the bestselling book just two weeks after it was released.

The success of her first book made her write three books subsequently. In 1980 she published Petals on the Wind. One year later she followed it with There Be Thorns.

In 1984, she wrote Seeds of Yesterday.  Between her three short stories, she came up with her first standalone novel My Sweet Audrina in 1982.

V. C. Andrews succumbed to breast cancer on 19th December 1986 in Virginia. A book she had started and failed to complete was finished by Andrew Neiderman.