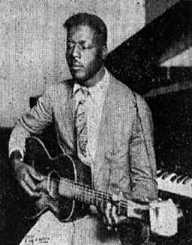 Celebrated classical singer of the Gospel Blue genre, Willie Johnson was born on January 22, 1897, in Brenham, Texas, United States of America. He was not blind by birth. At the age of seven, he witnessed a violent confrontation between his sharecropper father George Johnson (Also referred to as Willie Johnson Sr.) and his stepmother. In a fit of rage, his stepmother threw a caustic solution of lye water at his father. To his horror, the strong alkaline solution missed his father and hit his face. The impact of the solution was so severe that it blinded him permanently.

His original mother Mary Fields died in 1901. Johnson spent most of his childhood days in the agriculturally rich Marlin City in Falls County of Texas. He visited the church there every Sunday with his family. When he was five years old, his father gifted him a cigar box guitar. It was his first musical instrument.

After the tragedy of becoming blind forever, Johnson began earning his livelihood by singing on street corners of small towns and cities of Texas. He mainly sang Gospel songs simultaneously playing guitar as an accompaniment. In 1927, he moved to Dallas, Texas after becoming a Baptist preacher.

Johnson began his recording career in 1927 after having moved to Dallas. His reputation as an evangelist was already on the rise at that time. People regarded him for his unique technique and a wide repertoire of songs. His first record was a Gospel album by Columbia Records. Many of the singles of that album later went on to become classics in the Gospel Blue genre. Singing with a strong voice coupled with a rough low baritone achieved him a cult following of his songs. He supplemented his songs with his play of urgently rhythmic guitar and made his harsh singing a great force to reckon with.

Beginning in 1927, he recorded 30 songs in Dallas and Atlanta until 1930. His first two songs of his debut album sold more than 15000 copies. He created a unique style of slide guitar in his fifth recorded song “Dark Was the Night—Cold Was the Ground”. This song is a wordless one and dealt with the crucification of Jesus Christ in a haunting style of singing hymns. The song was later included on the Golden Record. A phonograph copy of this record was later placed on one of NASA’s Voyager space exploration. This was done to introduce a proof of human civilizations on earth to any extraterrestrial creature that might have a chance encounter with the spacecraft.

He is regarded as the pioneer of the slide guitar playing and also credited as the most powerful practitioners of the blues. In the 1960s, some compilation of his albums revived the interest of people in Johnson’s music. ‘Anthology of American Folk Music’ by Harry Smith and the album ‘American Epic: The Best of Blind Willie Johnson’ are among two such prominent compilations responsible for making the works of Johnson accessible to the music lovers.

Johnson stopped recording after 1930. However, he went on to perform in several cities and towns of Texas throughout the 1930s and also during the first half of 1940s. In 1945, a massive fire destroyed his house in Beaumont, Texas. As there was no such place where he could stay, he continued to reside in his charred house among the ruins. He contracted pneumonia having exposed himself to the humidity in the remains of his burnt house. He died on September 18, 1945, after suffering from the disease for about a year. Researchers erected a monument in his honor in Blanchette Cemetery, in Beaumont in 2010 after rediscovering the place where he was buried.

Johnson had an unregistered marriage with Willie B. Harris in 1926 or in early 1927. She occasionally used to accompany him during his singing on street corners. They together had a daughter, Sam Faye Johnson Kelly, born in 1931. He remarried during the early 1930s. However, his second marriage with Angeline Johnson was again unregistered like his first one.