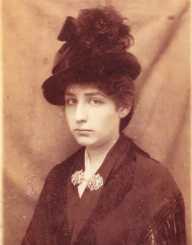 Camille Claudel was a French Sculptor and graphic artist born in 1864. Even though she destroyed most of her work when she was psychologically disturbed, the pieces that remained still marked her legacy. Among her greatest influencers was Auguste Rodin who later became lovers with Claudel. Unfortunately, things turned bitter when Caudel accused him of conspiring to murder her. She was mentally ill at the time. The great sculptress spent most of her later years in a psychiatric hospital after she became mentally ill.

Camille Claudel was born on December 8th, 1864. Her place of birth was Fère-en-Tardenois in Aisne located in northern France. She was the daughter of Louis Prosper and Louise Athanaïse. Her father was a dealer of banks and mortgage transactions. Her mother, on the other hand, came from priests and farmers. Claudel had one sister and a younger brother called Paul Claudel. Her father died on March 2nd, 1913 and later her mother died on June 20th, 1929.

Camille Claudel grew up in many parts of Northern France like Lorrain, Picardy, and Champagne. They finally settled in Paris in 1881. Her beauty earned her much fame along with her art.

Camille Claudel took her sculpture lessons at the Académie Colarossi in Paris. She graduated from the university upon completing her studies. She then furthered her studies under Alfred Boucher at a private workshop. Together they came up with many pieces such as The Gates of Hell Claudel began her career in 1884 as an assistant sculptor in the same workshop. By that time her former teacher Boucher had been replaced by sculptor Auguste Rodin.

Having studied and worked under Rodin, most of her later sculptures bore his influence. Her excellent work was appreciated even by the critics at that time. Meanwhile, an affair started between Rodin and Camille Claudel In 1899 he saw Claudel’s work The Age of Maturity and was quite furious. From then he withdrew his efforts of supporting her work.  Still, The Age of Maturity a piece she worked on from 1893 to 1900 was of great success. It was the turning point of her sculpting career. She l came up with her work Bronze Waltz by 1893.

Camille Claudel publicized her work later in 1903. By then she was a member of ‘Société des Artistes Français.’ Her work was therefore displayed frequently in galleries for the whole of Paris to appreciate. Throughout her career, her work was of average success. The 20th century though was of better success to her career. At least she was financially stable at the time.

1905 marked the beginning of her end of a career. Camille Claudel developed mental illness and ended up destroying a number of her sculptors.  Fortunately, she still left behind many of her original sculptors as well as sketches. She spent 30 years of her later life in the asylum.

Camille Claudel was presented with the Salon exhibition prize in 1888. This was for her work Sakuntala. Later in 1951, the Musée Rodin honored her work by dedicating an exclusive room for her art.

Camille Claudel never wedded though she was involved with sculptor Auguste Rodin. The relationship lasted from around 1884 till 1894.

Camille Claudel took her last breath on October 19, 1943, after 30 years in a psychiatric hospital Centre. She was 78 years old at the time of her death.