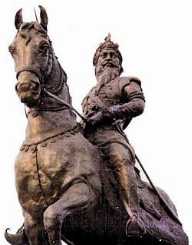 Founder Of The Sikh Empire

At age 21, he was declared the Maharaja of Punjab and ruled the empire through to 1839 when he died. To expand the territories of the Sikh Empire, he combated and absorbed other local kingdoms including one belonging to the Muslims. Maharaja Ranjit Singh was successful in defeating several invasions by the Muslim armies especially those from Afghanistan. Throughout his reign, he introduced several reforms, infrastructural development, and modernization of the kingdom.

Ranjit Singh was born Buddh Singh on November 13, 1780, to Mahan Singh Sukerchakia and Raj Kaur. His name was changed to  Maharaja Ranjit Singh, which means “victor of battles” after his father won a battle over the Muslim Chatham chieftain Pir Muhammad. Ranjit Singh lost his left eye after contracting smallpox at his infancy, which also led to his disfigured face. Maharaja Ranjit Singh received no education nor could he read aside from the Gurmukhi alphabet. His only training received at the time was martial arts, horse riding, and musketry.

Ranjit Singh had several wives and mistresses. Some accounts put his number of wives at 20 while others argue they were more than that. His first marriage was to Mehtab Kaur a political marriage of convenience to strengthen and reconcile the Sikh Misls. The marriage failed, and Ranjit Singh went ahead to marry Raj Kaur (Datar Kaur) of the Nakai Misl in 1798. They had a son Kharak Singh, and she was the favorite wife of Ranjit. She died in 1818.

In 1811 he married Ratan Kaur and Daya Kaur after their death of their husband Singh Bhangi of Gujrat under the rite of chadaandaazi. In 1819 Ratan Kaur delivered of a child, Multana Singh and that same year Daya Kaur also had her first child Kashmir Singh. 1n 1821 she delivered her second child Pashaura Singh. Ranjit Singh also married the following Moran Sarkar in 1802, Chand Kaur in 1815, Lachmi in 1820, Mehatab Kaur in 1822, Saman Kaur in 1832, as well as Guddan, Banso, Gulbahar, Gulab, Ram Devi, Rani, Bannat, Har and Danno and Jind Kaur. Jind Kaur was his last wife, and they had a child Duleep Singh, the last Maharaja of the Sikh Empire.

Due to his high alcohol intake, Ranjit Singh had several health complications among which is stroke and failing liver. He died in his sleep on June 27, 1839. During his cremation, his four wives and seven concubines committed sati by burning themselves on his pyre. The Sikh Empire declined and gradually disbanded after his death, and the British conquered it to form part of their empire

After Ranjit Singh took over the Sikh Empire, he instituted several reforms and engaged in several warfares to expand the territories of the empire. Powerful among the misls were the Sukkarchakkia, Kanhayas, Nakkais, Ahluwali as and Bhangi Sikhs.  Maharaja Ranjit Singh belonged to the Sukkarchakkia, but through the political marriage of convenience, he gained an alliance with the Kanhayas and Nakkais. His first major battle was against the Afghan Muslim ruler Shah Zaman, of the Ahmad Shah Abdali dynasty at age 17 in 1797. Shah had attempt attempted to takeover Panjab region with an army of 12,000 soldiers led by GeneralShahanchi Khan.

Ranjit Singh’s army defeated them making the Shah Zaman send another troop. This time around, Ranjit Singh masterminded, allowed them to enter his territories through Lahore and encircled them with his army.  Maharaja Ranjit Singh then cut food supplies to them and burn crops they relied on for food. This frustrated the Afghan army with most returning to Afghanistan. His major conquest was the takeover of Lahore in a battle  Maharaja Ranjit Singh led with 25,000 Khalsa army and his mother-in-law Rani Sada Kaur of Kanhaiya misl also leading 25,000 Khalsa to attack Bhangi Sikhs in 1799. The ruler absconded making  Maharaja Ranjit Singh and his troop's victors. Expansion of his empire became his primary motive and in 1802 attacked Amritsar, and took it from the Sikh misl.

Since he did not eat m heat, Ranjit Singh went ahead to ban the slaughter of a cow in the empire. He extended such policies in his employment contract for even foreign employees of his court. Maharaja Ranjit Singh also forbidsthem from smoking, eating beef, cutting their hair and also marrying and settling down with an Indian woman.

Maharaja Ranjit Singh ensured that worship places were not raced on the ground of the enemy but due to his detest for Muslim rulers,  Maharaja Ranjit Singh converted some mosques into other use. Some of these mosques included the Lahore Moti Masjid mosque turned into Moti Mandir, Lahore Badshahi Mosque turned into ammunition store and horse stables, and the Lahore Begum Shahi Mosque converted into a gunpowder factory among several others.

After taking over the Sikh Empire, Ranjit Singh introduced several reforms including in the army, infrastructural investment among several others. The army saw reforms in their training, equipment, payment and other sectors. In infrastructural investments and development, Maharaja Ranjit Singh established gunpowder and arms factories, cannon foundries and raw material for mines. This was to ensure that the Sikh Empire becomes self-sufficient. He, however, fell short of investing in roads and irrigation canals to improve the productivity of food. These reforms made the Empire prosperous and improved the standard of living of the people.

One of Ranjit Singh remarkable legacies works done on the Harmandir Sahib and Gurudwara of the Sikhs. He restored and expanded both, but the Gurudwara came with a grand style. It was rehabilitated with gold and marble resulting in the name, the "Golden Temple."  He also built two sacred temples in Sikhism, the Takht Sri Patna Sahib, and the Takht Sri Hazur Sahin. In his remembrance, a 22-foot-tall bronze statue of Ranji Singh was erected in the Parliament of India on August 20, 2003.