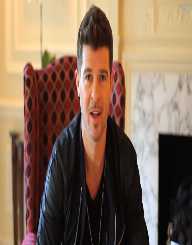 Robin Charles Thicke was born in Los Angeles, California on March 10, 1977. His mother is actress and singer Gloria Loring and father - Canadian actor Alan Thicke. Thicke’s parents divorced when he was seven years old. He also has an older brother Brennan, and a half-brother, Carter. When he was 17 years old, Thicke moved out of his parent’s home and was supporting himself as a professional record producer and songwriter.

Robin Thicke was interested in music from an early age. His father helped him to write his first songs but declined to pay Thicke and his vocal group's demo tape records. His father wanted Thicke to graduate before he pursued a career in music. Thicke's vocal group As One recorded a demo when he was 16 years old.

The demo soon landed in R&B artists Brian McKnight’s hands, who was very impressed by it. He invited Thicke to his studio to work with him, and he was soon signed to McKnight’s production company. Together with McKnight, Thicke wrote the song “Anyway” which was featured on the album I Remember You. By the age of 20, Thicke had produced and written multiple hits for artists like Jordan Knight, Christina Aguilera, Mya and many others.

At the age of 22, Robin Thicke was working solely on his debut album. He began working with Andre Harrel and in 2002 released his debut single When I Get You Alone. It had moderate success in the U.S., but peaked in the Top 20’s of Australia and New Zealand, as well as reached top 3 in the Netherlands. Thicke’s first album A Beautiful World debuted at number 152 on the Billboard 200 albums chart. Low success of the album troubled Thicke, but it was enough to make him a wanted collaborator. Artists like Usher, Lil’ Wayne and Mary J. Blige reached out to Thicke.

After the unsuccessful album release, Thicke's record’s company had lost faith in his ability to sell. In 2005, Robin Thicke signed with Star Trak and started to work on his second album The Evolution Of Robin Thicke. The single “ Wanna Love U Girl” was successful and a year later, the album was released. His second single from the album “Lost Without You” was released in 2006 and became a breakthrough hit on the Billboard Hot 1oo. The album later was certified Platinum by the RIAA, with more than 1.5 million sales in the U.S.

His next album Something else and its singles “Magic” and “The Sweetest Love” were also majorly successful. In 2009, Robin Thicke released his next album Sex Therapy. This album also featured artists like Snoop Dog, Estelle, and Nicky Minaj. In 2013, the album and single with the same name “Blurred Lines” was released. It was a sales success and became only the 137 alba in history to surpass the 1 million sales mark. The song received criticism for being misogynistic and supporting rape culture.

On August 2013 Thicke performed “Blurred Lines” together with Miley Cyrus in the MTV awards. The performance drew negative reactions for its sexism, racism, slut-shaming and cultural appropriation. Nevertheless, it became the most tweeted about event in history.

The song “Blurred Lines” received a lot of negative criticism. Robin Thicke with his co-writers {harrel Williams and T.I. were sued for ripping off Marvin Gaye’s 1977 hit Got to Give it Up. The three had to pay Gaye’s family $ 7.3 million as a part of the ruling, instead of the $25 million the family was suing for. Many scandals with Blurred lines draw negative attention to Thicke’s next album, Paula. Still, the album sold more than 24,000 copies in its first week after release.

When Thicke was 11 years old, he was being babysitted by Wayne Gretzky when the ice hockey star found out that he was being traded to play for Los Angeles Kings. He had to leave suddenly and left the boy alone. It was Thicke, who answered the legendary phone call from the Kings owner.