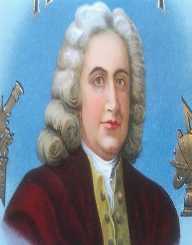 Edmond Halley was born on November 8, 1656, in Haggerston, east London. His father Edmond Halley Sr. was a wealthy soap-maker. Halley showed interest in mathematics from early life. He attended the St. Paul’s School and in 1673 enrolled at The Queen’s College, Oxford. As an undergraduate, Halley published his first major paper on the Solar System and sunspots.

While Edmond Halley was in Oxford, he was introduced to John Flamsteed- the Astronomer Royal. Flamsteed was a significant influence on Halley, and he began a project to compile a catalog of stars for the Southern Hemisphere. In 1676, Halley went to the Saint Helena island of South Atlantic and set up an observatory to catalog the stars. While there, he observed the transit of Mercury and came to a realization that it is similar to the transit of Venus and it can be used to determine the size of the Solar System.

In 1678, Edmond Halley traveled to Danzig, to resolve a dispute between Johannes Hayelius and Robert Hooke, and verified the quality of Hayelius observations without using a telescope. The following year, Halley published his Catalogus Stellarum Australium, detailing 341 southern stars. When he was 22 years old, Halley was awarded M.A. degree and was elected as a fellow of the Royal Society.

In 1686, Edmond Halley published a paper on trade winds and monsoons as a part of his Helenian expedition. He identified that solar heating is the cause of atmospheric motions and established a relationship between barometric pressure and height above sea level. He spent most of his time on lunar observations, but another primary field of interest for him was the problems of gravity.

In 1684, Halley went to Cambridge to discuss the proof of Kepler’s laws of planetary motion and found out that Newton had already solved the problem. Halley quickly recognized the importance of Newton’s paper on the movement of bodies in orbit. He and Newton collaborated on the Philosophiae Naturalis Principia Mathematica, which was published in 1687.

In 1691, Edmond Halley took up a new project and built a diving bell device. With the invention, he and five other companions dove to 60 feet in the River Thames and remained there for over hour and a half. The same year, he also introduced a working model of a compass. In 1691, Halley was a candidate for the Savilian Professor of Astronomy at Oxford, but his candidacy was opposed due to his religious views.

In 1692, Halley proposed the hollow Earth idea, which stated that Earth has a 500-mile-thick shell with two other concentric shells and innermost core. He suggested that each shell had its magnetic pole, to explain the anomalous readings of the compass. One of his significant publications was in 1683, an article of life annuities. This publication prompted the British government to sell life annuities at a price based on the age of the purchaser.

In 1698, Edmond Halley was made the commander of a Royal Navy ship investigate the laws governing the variation of the compass in the South Atlantic ocean. The first mission was unsuccessful, and in 1699 he sailed again. During his second mission, Halley made observations on the terrestrial magnetism, and the results were published in General Chart of the Variation of the Compass in 1701.

In 1703, Halley was appointed as the Savilian Professor of Geometry at the University of Oxford. In 1705, he published the Synopsis Astronomia Cometicae, on the comet sightings in 1456, 1531, 1607 and 1682, and stated that they were of the same comet. Halley did not witness the return of the comet, but after its next recurrence, it was named the Halley’s Comet.

Edmond Halley learned Arabic and translated the Books V-VII of Apollonius's Conics. He also completed translations of several Greek books. In 1716, he proposed a very high-precision measurement for the distance from Earth to Sun. Two years later, he discovered the proper motion of the fixed stars. In 1720, he participated in the first attempt to date Stonehenge. He and William Stukeley suggested that it’s dated around 220 AD. However, they were wrong by thousands of years. The same year, Halley succeeded John Flamsteed as the Astronomer Royal.

Edmond Halley married in 1682 to Mary Tooke. The couple lived in Islington and had three children together.
Edmond Halley died in 1742, 85 years old at the time.