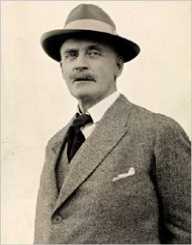 Knut Hamsun was a famous writer from Norway who was later awarded a Nobel Prize in 1920 in the field of literature. His experience in the world of literature spans over 70 years. Throughout his writing career, he went on to publish over 20 novels. In addition to this, he has written a number of poems and plays.

Knut Hamsun was born on August 4th, 1859 in Gudbrandsdalen, Norway. He was born into a low-income family of 7 children. He was the fourth born son of Tora Olsdatter and Peder Pedersen. When he was nine years old, Hamsun was sent by his parent to live with his uncle named Hans Olsen. Life was difficult for him at this time as his uncle frequently mistreated him. He was either flogged or denied meals, something that would later affect his nervous system later on in life.

In 1874, Knut Hamsun fled to Lom. Here, he took on different odd jobs that would earn him a living. He worked as a shoemaker, stonemason, store clerk, tram driver and several other tasks.

In as much as working in these odd jobs was difficult, later, they paid off as his first book was majorly based on them. This book was titled Den Gaadefulde -1877. The following year, he published his second novel dubbed Bjørger – 1878. In 1889, he published another book under the name Fra detmoderne Amerikas Aandsliv. Just like his first book, his publication talked more about his frequent trips to America as well as the odd jobs that he was involved in.

In 1890, Knut Hamsun's career came to a turning point following the publication of Hunger. This work also revolved around his struggles as he lived through hunger in Norway. This book earned him high acclaim as it shed light on his sufferings. Years later in 1954, all his literary works were published in a 15-volume book.

In 2009, a bid to mark his 150- year anniversary after Knut Hamsun's birth prompted scholars to publish another 27-volume edition that covered all his works. This new volume would take into account other works that had not initially been included, e.g., plays, poems, short stories, and articles. Hamsun left a legacy behind as his works are still famous through the 21st century. Some of his works have also gone through linguistic modifications just to guarantee that Norwegian readers are in a position to comprehend his writing.

Knut Hamsun tied the knot with Bergljot Göpfert in 1898. This relationship gave birth to their loving daughter named Victoria. Nonetheless, their relationship came to an end in 1906. Hamsun married for the second time to Marie Andersen. The two lovebirds lived together until the death of Hamsun. In his second marriage, Hamsun welcomed four children to their family. He had become deaf during the later stages of his life. This was due to the intracranial hemorrhages that he had previously suffered during World War II.