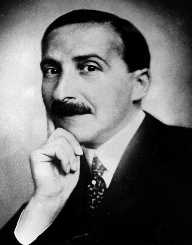 Stefan Zweig was an Austrian author, journalist, and playwright.

Stefan Zweig was born in the city of Vienna, Austria-Hungary, on November 29, 1881. He came from a wealthy Jewish family. His father, Moritz, was the owner of a textile manufacturing business. His mother, Ida, was the daughter of a prominent banker.

Stefan Zweig enrolled at the University of Vienna. He studied philosophy and earned his doctorate in 1904.

In 1900, Zweig released his first novel, Forgotten Dreams. He wrote a large number of novels and novellas throughout the years. His most famous works include Fear, Amok, Letter from an Unknown Woman, and others. In 1927, he published the novella Twenty-Four Hours in the Life of a Woman. It depicted the story of an English widow who falls for a Polish diplomat.

Stefan Zweig wrote three plays, named Termites, The House on the Sea, and Jeremiah. In 1930 and 1936, he published two collections of short stories. He wrote the libretto for The Silent Woman and Daphne, two operas composed by Richard Strauss.

Right before his death, Stefan Zweig finished his autobiography. It was titled The World of Yesterday: Memories of a European. He described his experiences growing up in Austria and later fleeing the Nazis. After his death, the book was published in 1942 in Stockholm. It was later published in a number of other countries. It achieved great success and it became one of the most famous books from the Habsburg Empire.

During his lifetime, Zweig was very popular in Europe and the Americas. Because of his Jewish heritage, the Nazis tried to destroy many of his books. His works became popular again towards the end of the 20th century. Many of his novels and biographies were published years after his death. He originally wrote in German, but almost all of his writing has been translated into English.

Stefan Zweig began an affair with a married woman named Friderike Maria von Winternitz. She later left her husband and the two of them got married. In 1934, they moved to England to escape the rising power of the Nazis. They got a divorce in 1938. A year later, Zweig married Elisabeth Charlotte Altmann, his secretary. In 1940, the two of them moved to the United States and briefly lived in Connecticut and New York. They then moved to Petropolis, a German-colonized town in Brazil.

Stefan Zweig was depressed because of the situation surrounding World War II. On February 22, 1942, he and his wife committed suicide in their home in Petropolis. They overdosed on barbiturate and died holding hands. Their bodies were found the next day. They were buried at the Petropolis Municipal Cemetery.

There is a street named after Zweig in Laranjeiras, an upscale area in Rio de Janeiro. Director Wes Anderson said that the protagonist in his 2014 film The Grand Budapest Hotel was inspired by Zweig.