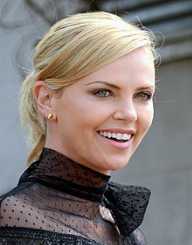 Born on August 7, 1975, Charlize Theron is a South Africa-born American actress and producer. She was given a U.S Citizenship in 2007 but never revoke being a South African. Theron has built herself a strong reputation in the movie industry has acted in numerous Hollywood films, including The Devil’s Advocate, Mighty Joe Young, Monster, The Italian Job and Mad Max: Fury Road. The award-winning actress ventured into production later 2000s releasing the documentary East Havana in 2006.

She has also produced films like The Burning Plain and Dark Places in which she also starred. She has won the Academy Award, Silver Bear, Screen Actors Guild Award, and Golden Globe Award. Times Magazine named her among the Time 100 most influential people list in 2016.

Charlize Theron born on August 7, 1975, in Benoni South Africa. She is the only child of Gerda Jacoba Aletta and Charles JacobusTheronfrom the Afrikaner ethnicity. Charlize Theron had an abusive and alcoholic father who always physically attacked them when he was drunk. Her mother got fed up with that attitude and shot him dead on June 21, 1991. Gerda Jacoba Aletta was not charged because it the act was seen as self-defense. Charlize Theron spent his childhood life in Benoni and attended the Putfontein Primary School. She later moved to a boarding school at age 13 and also enrolled at the National School of the Arts in Johannesburg. Theron was a talented dancer as a child, and at age six she took some ballet lessons to perfect her skills. Growing up she saw herself as a dancer than any other thing.

Charlize Theron had an early career in modeling after contesting in a local modeling contest in Salerno. She won the contest and was offered a year modelling contract at age 16 and moved to Milan, Italy with her mother to model. After the contract was exhausted, she moved with her mother to New York City, United States. Whiles there, she sharpened her dancing skills by enrolling in the Joffrey Ballet School to be trained as a ballet dancer. Unfortunately, she had a knee injury which closed her dancing chapter. Charlize Theron recounts that she staying in New York was a difficult one as she sometimes spent three days in her friend’s windowless basement apartment. After coming to terms that her dancing career was over, Theron recalls she was very depressed.

Charlize Theron at age 19 was discovered in at a Hollywood Boulevard banking hall by talent agent John Crosby after her engagement in a heated argument with a bank teller who refused to cash her cheque. Her mother had sent in money through check for rent after she had moved to Los Angeles to seek an acting career. Crosby who was astonished by the kind of talent displayed at the bank shared contacts and later became her manager. Theron, however, fired him because he didn’t meet her expectations. In 1995 she eventually landed her debut role in a non-speaking horror film Children of the Corn III: Urban Harvest. With her performance, Charlize Theron had another role in 2 Days in the Valley, 1996 through which she achieved some level of recognition. Theron’s role in The Devil’s Advocate proves she has come to stay and has established herself as a talented actress. She also starred in Mighty Joe Young, 1998 and The Cider House Rules in 1999.

Theron started the year 2000 with a list of movies like The Yards, Men of Honours, Reindeer Games, Sweet November and the Legend of Bagger Vance. She, however, admits that some of the movies were bad but because she had love affairs of some of the directors, she couldn’t turn them down. 2003 can be arguably said as the peak year Theron’s acting career after starring in Monster as Aileen Wuornos, a serial Killer in 2003.

Her outstanding performance won her several awards including Academy Award for Best Actress in 2004, Screen Actors Guild Award and the Golden Globe Award and several other accolades. The Academy Award win made her the first South African to win the Best Actress category. Theron career grew to a stage that she got nominations for almost all works that she did.

In 2005 she featured in the television series Arrested Development which earned her several nominations including the Primetime Emmy Award. Her other works include North Country, Hancock, 2008.

He later went on hiatus for about two years and returned and resumed with the film Young Adult in 2011. She has since starred in other films like Prometheus, 2012, Dark Places, 2015, Mad Max: Fury Road, 2015 and the reprisal of her roles as Queen Ravenna in The Huntsman: Winter’s War released in 2006.

Charlize Theron established The Charlize Africa Outreach Project (CTAOP) in 2007 aimed at supporting African youth to fight HIV/AIDS. Through these efforts, she was named as the United Nations Messenger of Peace and in a citation Ban Ki-Moon commended her for the dedication to improving the lives of South Africans and her advocacy against the abuse of women and girls. Theron is a strong activist for same-sex marriage and lends her support to their activities. She is recorded to have that she would only get married when same-sex marriage is legalized in the United States of America. According to her marriage now is too one-sided therefore the need for variety through same-sex marriage.

In 2004 Charlize Theron signed an endorsement deal with John Galliano and also became the spokesperson for Christian Dior J’adore advertisements replacing model Tiiu Kuik. The use of her image for the advertising campaigns for Raymond watches added $3 million to her purse from October 2005 to December 2006.

Charlize Theron about a decade was involved in a long-term relationship with actor Stuart Townsend. The two, however, ended the relationship in 2010. In 2013 it was also speculated that she was in a seeing actor Sean Penn in 2013 but also called it a quit in 2015. She has also confessed to having love affairs with several directors at the early stage of her career.

Charlize Theron gained a U.S citizenship in 2007 but also maintained her South African status. She has adopted two children; a boy in March 2012 and 2015 also adopted a girl. She currently lives in Los Angeles. In 1999 she engaged in an unsuccessful lawsuit against Playboy magazine for using her earlier days modeling pictures as their cover page without her consent in May that. She had previously in January that year been used as the "White Hot Venus" by Vanity Fair.

Charlize Theron has won several awards and expected to gain several others as her career proceeds. In 2004, she won four awards for her role in Monster, 2003, including the Academy Award for Best Actress, Screen Actors Guild Award, Silver Bear and the Golden Globe Award. The Academy Awards made her the first South African to win the award in a major category. Charlize Theron received a star on the Hollywood Walk of Fame on September 30, 2004. For her works in theatres, she became the Hasty Pudding Theatrical Woman of the Year in 2008. She was among the 100 most influential people list in 2016 compiled by the Time Magazine.

Charlize Theron went into production in 2006 releasing the documentary East of Havana. She further produced films like The Burning Plan, 2008 and Dark Places in 2015.