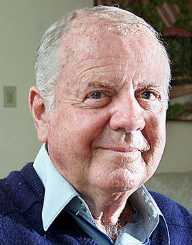 Richard Vincent Van Patten was an American animal welfare advocate, actor, and entrepreneur. Born on December 9, 1928, his acting career spanned seven-decade and is best known for his role as Tom Bradford on the ABC television comedy Eight Is Enough. Van Pattern began his career as a child actor and later ventured into stage acting. He has done several television works including the CBS television series; I Remember Mama and Young Doctor Malone. He has appeared in several films including Soylent Green, and Robin Hood: Men in Tights. Van Patten is the founder of National Guide Dog Month and Natural Balance Pet Food.

Dick Van Patten was born on December 9, 1928, in Queens, New York to Josephine Rose and Richard Byron Van Patten. His father was an interior decorator, and his mother worked as an advertiser. His younger sibling actress Joyce Van Patten and half-brother is television director and producer Tim Van Patten.

Dick Van Patten made a Broadway debut at the age of seven in 1935 and was a child model. He featured in Tapestry in Gray, starring Melvyn Douglas. Since then, he appeared in numerous theatrical plays in New York before later moving to Hollywood for a film and television career. He played the role of Nels Hansen in the long-running CBS series, Mama, which ran from 1949 to 1957. From 1977 to 1981, he played Tom Bradford on Eight is Enough, loosely based on a book by American Journalist Thomas Braden of the same name.

Dick Van Patten's last film was as Jack Benson in Opposite Day, 2009. Van Patten worked with Robert Baer to publish the book Eighty is Not Enough on November 1, 2009. He shares his eighty-year experience in the entertainment industry in the book.

Aside from acting, Dick Van Patten was an animal enthusiast and activist. In 1989, he co-founded Dick Van Patten’s Natural Balance Pet Foods. In 2008, he also founded National Guide Dog Month to raise funds and awareness for non-profit guide dog schools in the United States. From 1993 to 1995, he served as a commentator for the World Series of Poker.

Dick Van Patten married professional dancer Patricia Poole in 1954 until she died. The couple had three children Vincent, Nels, and Jimmy all of who became actors. Van Patten suffered a diabetic stroke and was admitted to Cedars Sinai Medical Centre. He also recovered fully from a Type 2 diabetes. Van Patten died on June 23, 2015, at age 86 of complications of diabetes at the Saint John’s Health Centre in Santa Monica, California. He was buried in the Forest Lawn Memorial Park, Hollywood Hills, Los Angeles.

Dick Van Patten was honoured with a star on Hollywood Walk of Fame on November 20, 1985. He also has a Golden Palm Star on the Palm Springs, California, Walk of Stars.