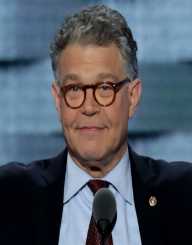 Alan Stuart Franken was born in New York City on May 21, 1951. His father, Joseph, was a printing salesman. His mother, Phoebe, was a real estate agent. His family was Jewish and of German and Russian origins.

When he was four years old, he moved to Minnesota. He graduated from the Blake School. He enrolled at Harvard University. He graduated in 1973, with a Bachelor of Arts in political science.

Al Franken started working on his satire in high school. His first performance was at the Brave New Workshop in Minneapolis. After graduating from university, he moved to Los Angeles. In 1975, he was recruited as a writer by Saturday Night Live. He created different characters. The most popular one was the self-help mentor Stuart Smalley.

In 1980, Al Franken left the show after mocking the president of NBC. He returned in 1985. The next year, he wrote the script for the comedy film One More Saturday Night. He finally left the show in 1995, to protest the fact that he was removed from news sketch Weekend Update.

Over the years, he received many Emmy nominations for his writing. He managed to win four of them. He often worked together with Tom Davis, his longtime friend.

In 1994, Al Franken co-wrote the romantic drama When a Man Loves a Woman. In 1995, he produced and acted in the film Stuart Saves His Family, based on his character from Saturday Night Live. The film was a flop, getting rejected by both audiences and critics. In 1998, he co-created and starred in the sitcom LateLine. It was quickly canceled.

Apart from television and film, Franken also wrote a few political satire books. The first one was Rush Limbaugh is a Big Fat Idiot and Other Observations, published in 1996. Apart from satire, he also wrote a collection of humorous life advice. It was called Oh, the Things I Know.

In 2004, Al Franken became the host of a talk show hosted on the Air America Radio network. It was originally called The O’Franken Factor, but it was soon renamed to The Al Franken Show. Katherine Lanpher was his co-host, but she left after a year. On the show, he criticized right-wing politicians. It stayed on the air until 2007.

Al Franken quit his radio talk show and announced his plan to run for Senate in Minnesota. His opponents used his previous satirical work to discredit him. He still managed to win the election in 2008. He supported several policies, including the single-payer system in health care reform and the data tracking conducted by the National Security Agency.

Al Franken was reelected for a second term in 2014. He became a very effective fundraiser for the Democratic Party. His campaigns gathered up millions of dollars, mostly because of his ability to draw in the audience.

In 2017, a woman named Leeann Tweeden accused Franken of kissing her forcibly during a skit in 2006. She also published a photo of him placing his hands near her chest while she was asleep.