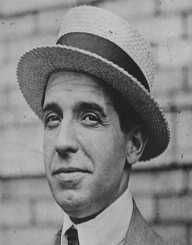 Con artist Victor Lustig was born in Hostinne in the Austria-Hungary Empire on the 4 January 1890.

Little is known about his education apart from the fact that Victor Lustig spoke five languages fluently.

Initially, Victor Lustig traveled on transatlantic ocean liners which operated across the Atlantic between Europe and North America. He made friends with fellow travelers attempting to con them with money-box contraption which he would sell for $10,000 to a gullible person at the end of the voyage.

In Paris, in 1925 Victor Lustig sold the Eiffel Tower to a scrap metal dealer. At the time there was some concern in France that the Eiffel Tower was rusting. Because repair and maintenance costs were high, Parisians were debating the wisdom of keeping the structure. Some even wanted the structure dismantled. (The tower had been built in 1889 the Paris Exposition). Victor Lustig heard about the debate and came up with a plan. He wrote to the largest scrap-metal dealers in Paris on forged stationary. He impersonated the Deputy Director the Ministry of Posts & Telegraphs and arranged so-called secret meetings with the scrap-metal dealers.

Victor Lustig pretended to be a civil servant looking for a bribe and convinced scrap-merchant Andre Poisson to give him $70,000 in bribes to ensure that Poisson’s bid for the Eiffel Tower would win. Victor Lustig returned to Austria and waited for the story to be covered, but nothing was reported. Poisson was too embarrassed to admit that he had been conned and never reported it. Lustig returned to Paris to try and sell the Eiffel Tower a second time but became suspicious that one of the new batches of scrap-merchants he was targeting had become suspicious he had contacted had reported the matter to the police. Lustig then left Europe and settled in the United States.

Initially, in America, Victor Lustig started conning people with his money box scam. Using multiple aliases, he was arrested sometimes. He managed to either get off the charges or escape from jail while awaiting trial.

Victor Lustig met Al Capone in Chicago and asked him to help finance a scam he was planning. He asked for $50,000 and promised to double the money in two months. Capone lent him the money. Victor Lustig kept the cash in a safe for two months. He then returned the loan of $50,000 saying that the scam had gone wrong, but he was repaying the loan. He won Capone’s trust who then lent him a further $5,000.

Victor Lustig got involved with a chemist named Tom Shaw in 1930. The two men started a counterfeiting scam making fake dollar bills. They eventually produced more than $100,000 worth of fake dollar bills a month. A sheriff from Texas got caught up in the scheme, and the Secret Service arrested him and sent him to jail. The sheriff, in turn, gave the Secret Service description of Lustig and they began hunting him down.

At this stage, the country was flooded with fake money, and it was affecting the economy. Then in 1935, the Secret Service agents who had been trailing Victor Lustig arrested him. They found a key in his wallet which led them to a locker on Times Square subway station. The fake dollar bills and plates inside the locker led to charges. Arrested, he was held at the Federal Detention Headquarters in New York. On the day of his trial on the 2 September 1935, he had vanished.

New fake money began to flood the market, and the term Lustig Money was coined. Victor Lustig was eventually located by Federal agents after a jealous girlfriend made an anonymous call to the police. He was subsequently arrested in 1935. Then on the day of his trial, he used bed sheets for a rope and escaped again. He climbed down masquerading as a window cleaner.

Victor Lustig was finally captured a third time in Pittsburgh. He was found guilty and sentenced to twenty years on Alcatraz. He died in prison in 1947.