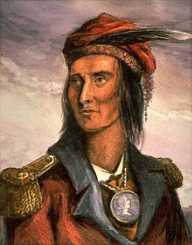 Tecumseh was one of the Native American warriors who joined forces with the British in resisting the American occupation of their land.

Tecumseh was born in Old Piqua in Ohio in around 1768. His name in his Shawnee language means Shooting Star. He was the son of one of the tribal chief Pukeshinwah. Tecumseh was raised during some of the ravaging wars in the US. Constant border wars between the US and British Canada put his homeland at the battlefront. He lost his father in 1774 during the native war with the French Canadian forces. Fearing more French onslaughts, a section of the Shawnee tribesmen migrated to Missouri for a safe haven. His mother was one of them. He was then raised by his elder sister in Ohio.

As a young lad, Tecumseh was a devotee of a local Mohawk chief. Chief Grant had created an alliance of native tribes to oppose the white settler’s advancement in their territories. The philosophy of chief inspired Tecumseh. Under the native confederation alliance, Tecumseh joined in many of the raids done by the warriors. After several successive raids, his military prowess began to appeal to his peers. In two occasions, he proved more skillful than earlier thought. In 1791, he battled against the American forces led by General Arthur Clair. In the battle of Wabash, Tecumseh snatched a decisive victory. The 1,000 strong US army was annihilated save for a handful.

His growing military stature was shattered in 1794. He ambushed the American army at Fort Recovery. His raid was repulsed by General Anthony Wayne. The skirmish was later known as the Battle of Fallen Timbers. His defeat left him bitter and his warriors demoralized. As was the tradition, the US army offered a peace deal with the natives. The natives were to give up their land for peace and resettlement elsewhere. Tecumseh was defiant and labeled the chiefs who obliged to the treaty sellouts.

When Tecumseh was busy becoming the de facto military leader of the confederation warriors, his younger brother became a respected spiritual seer. Feeling betrayed by the peace deal, Tecumseh returned to Ohio in 1808. With his prophet brother, they led his tribesmen to a new settlement they called Prophetstown after his brother. He continued his enlisting of a new alliance of the native tribes. In 1809, Tecumseh was tested once again. The Ohio State Governor proposed a treaty in exchange for native land. He rejected the offer, but his brother agreed to it. Tecumseh’s brother rescinded his decision after the warriors sided with Tecumseh. Anticipating a war, the Native American warriors struck first. Led by their prophet Tenskwatawa, the natives went to war against the US in 1811.

When the intelligence machinery of the US army got information, they prepared for a counteroffensive. They made strategic formations on the two rivers that marked their boundaries. In the ensuing battle of Tippecanoe, Tenskwatawa was pacified and driven away. The US forces razed down the town and looted all they could from the ruins. Tecumseh, on the other hand, had made an alliance with the British Canadian army to help him fight the Americans. In particular, Tecumseh wanted the Americans out of the native lands of Ohio Indiana, Wisconsin and parts of Michigan. The British obliged. The natives regrouped under Tecumseh for war. In 1882, the war started in earnest.

As the war progressed, fortunes swung from side to side. Tecumseh managed to recapture Michigan and major parts of Ohio. The Americans decide to cut out the British from the battlefield. The US forces opened another battlefront on the north border with Canada. Having no forces to fight the Americans, the British quickly lost ground in their country. They retreated to hold the American incursion. Tecumseh engaged the Americans on Canadian territory at Thames. In the Battle of Thames, the British retreated again. Tecumseh, however, relied on the British promise of sending military supplies to him. The British never came back to Thames. The native army was defeated. Its revered leader Tecumseh was killed in October 1883. Tecumseh passed on at the age of 65years.

With a warrior force of only 500 men, Tecumseh managed to put up a gallant military war against the might of the American war machinery. His military prowess on the battlefield is still admired within the Native American and US military folk tales.