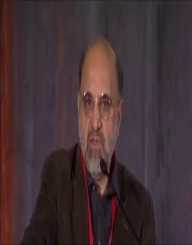 Abdolkarim Soroush is Iranian Reformer, Thinker and Rumi scholar born on December 16th, 1945. He was also once a philosophy professor at Imam Khomeini International University and the University of Tehran. During his studies, he pursued Analytical Chemistry, philosophy of science and history. He currently works at the Institute for Cultural research and studies. He joined the Institute shortly after he left the Tehran teacher’s training college. He helped establish the Kiyan magazine which was later closed down. His participation in politics involved advocating against in the participation of clergies in political affairs. Among his publications was the book Knowledge and Value. This was a book he authored in England. He has also authored about 25 other books during his career. He was honored with the Erasmus Prize in 2004.

The little known about Abdolkarim Soroush’s early life is that he was born on December 16th, 1945 to a middle-class family. His place of birth was Tehran.

Abdolkarim Soroush began his education at Qa Immiyeh School situated in Tehran. He then enrolled for his secondary education at the Mortazavi. Later he also attended Alavi high schools. He passed the National Entrance Exam and was admitted to Iran. After attaining his degree, he went to London for further studies. In London, he pursued Analytical Chemistry and attained his degree later. He then enrolled in Chelsea College where he studied philosophy of science and history.

Abdolkarim Soroush returned to Iran after the 1979 Iranian Revolution. His first book was then published with the title Knowledge and Value. He wrote the book while he was in England. He then got a job at the Tehran teacher’s training college. He served as the Islamic cultural group’s director at the college. He later left the college in 1983 after he disagreed with the college’s management.

Meanwhile, Abdolkarim Soroush gained membership at the Cultural Revolution Committee. This was a committee of seven members only. It was established following the closing of all Iran’s universities. He then joined the Institute for Cultural research and studies where he still offers his services.

In the 1990s, he became a great advocate against in the participation of clergies where politics is concerned. He published some articles in Kiyan magazine. He was the co-founder of the magazine. An orthodox Islamic group was not happy about the stories at the magazine and advocated against it. In 1998 they succeeded in their efforts to bring down the magazine.

During his career, his lectures on different subjects were tapped and circulated all over the world. The topics of the lectures ranged from political, literary and religious matters. This further aggregated the orthodox. By then they became his great enemies. They further harassed Soroush until he even lost his job. His security was also greatly compromised. Since 2000, Abdolkarim Soroush has served in different learning institutions worldwide. He has worked as a part-time scholar in Princeton, Harvard and the University of Chicago among others.

Abdolkarim Soroush was honored with the Erasmus Prize in 2004. In 2005, he was rated among the top hundred most influential people by the Time Magazine. In 2008, he was once again selected among the top influential intellectuals worldwide. This was in a survey by Prospect magazine of the UK.

Abdolkarim Soroush has a wife, a daughter as well as a son-in-law.