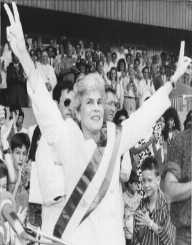 Violeta Barrios Torres de Chamorro was born on October 18, 1929, in Rivas, a small town in Nicaragua, on the border with Costa Rica. She came from a wealthy and conservative family, which had large landholdings and cattle. Chamorro went to the Sagrado Corazon de Jesus primary school in Rivas, and later the French school in Granada. She began her secondary education at the Colegio La Inmaculada in Managua.

Since her parents wanted her to perfect English, she was sent to American boarding school. Violeta Chamorro attended the Our Lady of the Lake Catholic High School for Girls in San Antonio, Texas, and in 1945 switched to Blackstone College for Girls in Virginia. In 1947, her father was diagnosed with lung cancer and died before she could make it home. Chamorro returned to Nicaragua and did not graduate school in the United States.

In 1949, Violeta Chamorro met Pedro Joaquin Chamorro Cardenal. The couple married in 1950 and had five children together. When his father died in 1952, Chamorro inherited the newspaper La Prensa and took over the publishing. Under Chamorro’s regime, the newspaper became a voice of the opposition for Somoza regime. Chamorro was often jailed between 1952 and 1957 for the content of his paper. In 1957, he led a revolt against Somoza, which resulted in him being exiled to Costa Rica.

After her husband was exiled, Violeta Chamorro settled their children with his mother and followed him. They spent two years in Costa Rica, where Pedro continued to write against the regime. Upon their return to Nicaragua, Chamorro was again jailed. Over the next two decades, her life was often about reuniting with her husband and children. In 1978, Chamorro was assassinated, and she took over the newspaper.

Chamorro’s assassination sparked the Sandinista Revolution, and he became the image of their cause. When Daniel Ortega led the Sandinista guerillas into Managua in 1978, Chamorro was with them. Violeta Chamorro represented the Democratic Union of Liberation in the first Junta of National Reconstruction. The directorate initially promised an independent judiciary, free elections, and enterprise, as well as the free press. It was believed that a Marxist-style government would restore the impoverished country. However, Sandinistas soon began to censor newspapers and took over TV and radio stations.

In 1980, Sandinistas signed several accords with the Soviet Union, which caused the US President Jimmy Carter to approve the CIA support for the opposing forces, despite initially promising aid to the government. Chamorro resigned from the Junta in opposition to the Sandinista’s push for control. Her exit also prompted other members of Junta to resign and join newly formed opposition groups. She returned to her role as the editor of La Prensa and began advocating free speech and opposition. Ortega himself threatened her with 30-years imprisonment.

In 1987, the 14 opposition political parties began working together, and two years later, Ortega allowed free and monitored elections. Violeta Chamorro was selected as the candidate for National Opposition Union. Her platform consisted of two key points: ending the civil war and ending the mandatory military service. At the same time, Ortega was spending large sums of money on his campaign and acted as if he had already won. Chamorro won the election with a 54.7 % vote and became the first elected woman president in the Americas.

Violeta Chamorro was sworn into office on 25 April 1990. During her term from 1990 to 1997, Nicaragua experienced a major economic and social decline, falling from the 60th to 116th place in the world in terms of human development. However, her most enduring legacy became the peace reforms. She declared the end of the war and maintained peace by reducing the size of military power and ended the national draft. She also granted unconditional amnesties for political crimes, allowing a smooth transition from Sandinista government. The biggest downside of the military demobilization was that around 70,000 military personnel were left with no jobs.

After Chamorro’s election, George H. W. Bush removed the embargo on Nicaragua, allowing the economic aid to the country. The United States also paid off the past-due debts of Nicaragua to private banks, International Monetary Fund and the World Bank. The provided aid, however, was not enough to make a difference and the US lost interest in her presidency.

To improve the economic situation, Chamorro devaluated the currency and ended subsidies of basic consumer good reduced the governmental spending, but created a wave of rising prices and layoffs, as well as stagnant wages. In 1995, Chamorro faced the Constitutional crisis, which signified a threat to maintaining peace.

The reforms in the Constitution reduced the power of the presidency, and Chamorro refused to publish the changes in the official journal of the legislature. In response, the legislature published revisions on its own, creating a situation of the dual constitution, making Supreme Court unable to work.

After her term ended in 1997, Violeta Chamorro retired from politics and established a foundation in her name, with the goal of creating developmental projects to strengthen the peace initiatives. She also joined Carter Center’s Council of Presidents and Prime Ministers of the Americas Program to work for co-operation and peace throughout the Americas.

Throughout her presidential campaign, Violeta Chamorro was suffering from arthritis and osteoporosis, needing to spend the most time with crutches. After her presidency, she developed a brain tumor and was not appearing in public. In 1997, Chamorro received the Path to Peace Award from the Path to Peace Foundation. In 2001 she was honored with the Awards for Leadership in Global Trade.