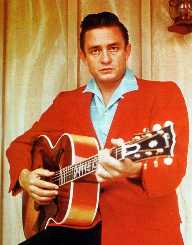 Johnny Cash was born on February 26th, 1932 in Arkansas, Kingsland, United States. He was from a low-income family that was mainly involved in farming activities. In 1950, Cash joined the Air Force. After his discharge from the army, he went ahead to come up with a band. In just a few years of working with the Tennessee Two, Cash had released some hit songs including “Walk the Line.”

During the 60, Cash's career almost came to a fall after becoming a drug addict. Fortunately, he was back on the rise after marrying June Carter. In addition to this, his 1968 album Johnny Cash at Folsom Prison also brought some light to his career. Cash had several diabetic complications which led to his death at the age of 71.

Born on February 26th, 1932, Cash was one among the family of seven that he was born into. His parents were Ray Cash and Carrie Cloveree. During his birth, Cash had been given the name J.R. Cash.

After being enlisted in the Air Force, he was not allowed to use initials as his first names. Consequently, he opted to change his name to John R. Cash. Later on, in his music career, he used Cash as his stage name.

Because John Cash was from a poor background, he had to help his family in earning money by working in cotton fields. Their financial troubles went from bad to worse after being victims of ‘the Great Depression.’ The problems that he was going through would later become stories to tell in his songs.

By the age of 12, Cash had already lost his elder brother who was only 15 years old at the time of his death. During this time Cash began writing songs. He had been inspired by Irish and gospel music. The next thing that he was able to learn was the guitar. After this, he gained the opportunity of playing at one of the local radio stations.

In 1950, Cash joined the Air Force. His post was a Morse Code Intercept Operator. He did not stray from his love for music as he formed the group ‘Landsberg Barbarians’ with a number of his fellow soldiers. It is during this time that he wrote Folsom ‘Prison Blues’.

After spending close to four years in the Air Force, he was discharged, and he went back to Texas.

Immediately after being discharged from the military, John Cash got married to Vivian. The two settled in Memphis, Tennessee. During this period he was working as an appliance salesman. Nonetheless, he still had his music career by his side. Shortly after, Cash joined hands with some mechanics in forming a team. These mechanics included the likes of Luther Perkins and Marshall Grant. Their wives were also involved in this group as they met over their houses to sing and enjoy gospel music.

In 1954, John Cash and his team were inspired by one of the Memphis musicians that released his first recorded song. Sam Philips, an owner of Sun Records, had issued the recording. It is from this recording that Cash wanted to try him out. Cash and his teammates, Grant and Perkins visited to do an audition with Sam Philips. Well, Philips was impressed with the trio and gave them a chance. Nonetheless, he was least interested in their gospel genre. As a result, he requested the group to try another original song.

Later the trio came up with “Hey Porter” which was written by Cash. Their efforts were futile as Philips did not like their music. After this, they recorded “Cry, Cry, Cry.” They later branded themselves as Johnny Cash and the Tennessee Two. Their earlier recorded songs such as “Hey Porter” were released in 1955.

In 1956, this was the year that Johnny Cash became famous. It is in this year that he released his written song “I Walked the Line.” The song was a significant hit, and it earned the top spot in the country music charts. Sales were also good for the hit song as more than two million copies were sold.

During the 60s, Johnny Cash had become a superstar. His career was on an uphill as he was in high demand all over. His tours took most of his time and pressures soon began to mount on him. Drugs and alcohol became the only way to calm his nerves.

Vivian, his wife, had already left to their home to take care of the four children they had together. Sooner or later, Vivian was disappointed with Cash’s absence and then filed for divorce. Cash’s career had fallen to the ground after he severely abused drugs to the point of almost dying on several occasions.

Just when things were going haywire, his former touring friend June Carter, came to his rescue. She helped Cash strengthen his faith and later got him the treatment he needed to survive the post-drug abuse effects. In 1968, Cash got married to Carter.

After a year of staying together, Cash was considered to host The Jonny Cash Show. This gave Cash an ideal platform to engage socially with the public on some delicate issues such as that of the Native Americans and their rights.

Still, in 1968, Cash managed to bag his Grammy award for debuting live shows for his previous album Johnny Cash at Folsom Prison. In 1970, Cash and Carter were blessed with their first born child, John Carter Cash.

During the 90s, Cash suffered significant health issues which affected his career. In spite of this, he still managed to pull through and teamed up with several country song artists including Rick Robin.

During the late 90s, Johnny Cash was diagnosed with neurodegenerative disease Shy-Dragerdisease. After this, he was hospitalized for pneumonia that affected his lung performance. He later died on September 12th, 2003.