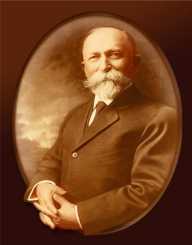 Founder of the Kellogg Company

Will Keith Kellogg was born on April 7, 1860, in Battle Creek, Michigan. He was the seventh of 16 children to Ann Janette and John Preston Kellogg. His father had a broom-manufacturing business, where he began to work at a young age. When Kellogg was 13 years old, he started selling his father's brooms to local grocery stores.

Kellogg began showing interest in the business at a young age, and when he was 13, Kellogg dropped out of school and joined his fathers business. He worked with his father until 1880, when he went to study at Parson’s Business College in Kalamazoo, where he finished a three-month business program. At the time, his brother John had completed medical school and went to work at the Adventist Health Reform Institute, later renamed the Battle Creek Sanitarium. Kellogg joined his brother at the sanitarium and was appointed as his brother’s business manager.

While in the sanatorium, John was experimenting with new foods and was developing fresh vegetarian meals to give to his patients. In 1894, Will was experimenting with wheat flakes and discovered a method to toast them into a nutritious breakfast product. The brothers quickly realized the potential of this product and found that cereals can also be made with oats, rice, and corn. In 1879, the brothers started the Sanitas Food Company. With the help of Dr. Kellogg, the brothers promoted cereals as a healthy breakfast option.

Will Kellogg wanted to keep the process of making cereals a secret, but his brother allowed anyone to observe it. One of the visitors, C. W. Post, copied the process and started his own company. This event upset Will very much, and he left the sanatorium to create his private company.

Will Kellogg founded the Battle Creek Toasted Corn Flake Company in 1906, and it later became the Kellogg Company. The business increased, and breakfast cereals quickly became favorite breakfast food. In 1930, Kellogg established the W. K. Kellogg Foundation and donated $66 million. It was instrumental to the founding of the California State Polytechnic University in Pomona and Kellogg College in Oxford.

Kellogg Company became the first food business to put nutritional labels on foods, and the first company to put an inside-the-box gift to children. Kellogg had stated on various occasions that he works for the people, not money. His efforts were shown during the Great Depression, when Kellogg restructured his plant to work in four shifts, giving more people in Battle Creek work.

Throughout his life, Will Kellogg had a significant interest in Arabian horses. In 1925, he established a 377-acre Arabian horse ranch. He began breeding the horses and became well known in southern California, not only for his horse breeding but also for his entertaining program and horse exhibitions. Kellogg donated the ranch to the University of California in 1932. During the World War II, the ranch was used by U.S. War Department.

Will Kellogg's ranch was also a location of the W. K. Kellogg Airport, which operated until 1932. Will Kellogg died on October 6, 1951, in Battle Creek, Michigan, 91 years old at the time.