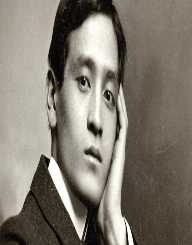 Maksim Bahdanovi was a famous Belarusian journalist, literary critic, poet, and translator. Born on December 9, 1891, Maksim Bahdanovi lived a short life dying at age 25, nonetheless contributed his quota to the literary circle of Belarus. Maksim Bahdanovi poetry works were predominantly in Belarusian, while his essays and articles were in Russian and Ukrainian. His first novel was‘Muzyka’ (Musician), which was published in ‘NashaNiva’a Belarusian daily.

Maksim Bahdanovi gained a high reputation for exploring the history of Belarus and penning it down in a poetic style. Aside from his career as a poet, Maksim Bahdanovi was also an acclaimed translator and translated works of Taras Shevchenko,Alexander Pushkin,Heinrich Heine, Paul Verlaine and Friedrich Schiller to Russian and Belarusian. He also translated works of other languages like German, Ukrainian, Finnish and French. Bahdanovi? died of tuberculosis.

Maksim Bahdanovi was born to Maria and Adam Bahdanovic on December 9, 1891, in Minsk. When Maksim Bahdanovi was a year old, the family moved to Hrodna. However, that was soon with a tragedy to the family as Maria died of tuberculosis that same year, an event that affected the family greatly. At a young age, Maksim Bahdanovi developed an interest in literary works and had his education at a gymnasium in 1902. At age 14, he participated in the Revolution of 1905 by joining strikes organized by commilitodes.

In 1916, Maksim Bahdanovi moved to Minsk to work at the local guberniya administration. A full collection of his poetry was published from 1991 to 1995 in Belarus. Maksim Bahdanovi worked on several social, artistic and philosophical lyrics and with that became the first poet to introduce new lyrical forms to Belarusian literature. Aside from his short but accomplished career as a poet, he was also an acclaimed translator. Maksim Bahdanovi translated the works of Alexander Pushkin, Paul Verlaine, Heinrich Heine, Horace and Ovid among others into Belarusian. Maksim Bahdanovi also translated into Russian works of Ivan Franko, Taras Shevchenko, and JankaKupala.

Maksim Bahdanovi contracted tuberculosis just as his mother and sought for an unsuccessful treatment in Crimea in February 1917 for three months. Maksim Bahdanovi died that same year on May 25, 1917, at age 25 in Yalta. Most of his works were destroyed during the Russian Civil War in 1918.

Some streets in Belarus and Russia are named in his honour. Some museums in Hrodna, Yaroslavi, and Minsk, including the MaksimBahdanovic Literary Museum, are in his honour.