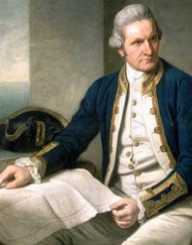 Born on November 7, 1728, Captain James Cook was a British navigator, explorer, and cartographer. James Cook who was a Captain in the Royal Navy made three voyages to the Pacific Ocean after he had mapped down details of Newfoundland. During the voyage, James Cook recorded the first European contact with the eastern coastline, the Hawaiian Island and circumnavigation of New Zealand. James Cook was also the first to survey and name features, recorded islands and coastlines on the European maps during his voyages. His show of courage, leadership qualities, seamanship, surveying and cartographic skill were primary factors for all his navigation achievement. During his third voyage, James Cook was attacked and killed as he tried to kidnap the native chief of Hawaii in1779.

James Cook was born on November 7, 1728, in Marton, Middlesbrough, England? to James Cook and Grace Pace. He was the second child of eight by his parents. His father worked as a Scottish farm laborer. When James Cook was eight years, the family moved to Airey Holme farm at Great Ayton. It was during this time that the farm owner, Thomas Skottowe paid his fees to attend a local school. At age 16, James Cook moved to Staithes, a fishing village 20 miles from Airey Holme where James Cook served as a shop boy apprentice under grocer and haberdasherWilliam Sanderson. James Cook spent a year and a half as an apprentice but left for a nearby port town of Whitey, when he released he was not compatible with being a shop boy. At Whitney, he made friends with Sanderson’s friends John and Henry Walker who were Quakers and local ship-owners and trade in coal.

James Cook was hired as a merchant navy apprentice on a vessel that plied along the English coast. He sailed between the Tyne and London aboard the collier Freelove and others for three years as an apprentice. During this time, he learned geometry, algebra, trigonometry, navigation, and astronomy; a knowledge would be applied in future as he commands his own ship. After his apprenticeship, James Cook worked on a trade ship on the Baltic Sea.

James Cook later sat for exams, passed and was promoted to a merchant navy rank in 1752. His first assignment afterward was as a mate aboard the collier brig, Friendship. On June 1755, James Cook was volunteered to enter the Royal Navy prior to British preparation towards what became the Seven Year’s War. James Cook believed joining the Navy was an opportunity to advance in his navigation career.

After joining the Navy in 1755, James Cook was assigned to the HMS Eagle where he served under Captain Joseph Hamar as anable seaman and master’s mate in the first year and under Captain Hugh Palliser afterward. James Cook was part of the Eagle crew that captured a French warship and sunk another in October and November that year.

This gained him a promotion to boatswain. In March 1756, he temporarily commanded the Cruizer, a small cutter that was attached to the Eagle. James Cook became qualified to handle and navigate a ship of the King’s fleet after he passed his master’s examination at the Trinity House, Deptford in June 1757. He subsequently worked under Captain Robert Craig as he joined the frigate HMS Solebay as master.

In 1757 James Cook aboard the Pembroke as a master serving in North America as the Seven Year’s began. James Cook partook in the various assaults including the capture of the French’s Fortress of Louisbourg and the siege of Quebec City in 1758. James Cook was also part of the Battle of the Plains of Abraham in 1959. During the siege, his talent in surveying and cartography became handy as he took charge in mappingmuch of the entrance of the Saint Lawrence River. This helped the General Wolfe to secretly attack the Plains of Abraham. In the 1960s, while aboard the HMS Grenville, his surveying skills even became more vital as he mapped the coast of Newfoundland.

James Cook's surveyed the north-west stretch in 1763 and 1764, the south coast of the Burin Peninsula and Cape Ray in 1765 and 1766 and lastly the west coast in 1767. To achieve all these and avert any form of danger, especially during the survey of the south and west coast, James Cook hired the services of local pilots to point out rocks and hidden dangers. The pilots hired included John Beck for the coast of thewest of Great St Lawrence, Morgan Snook for Fortune Bay, Connaigre and Hermitage were done by John Dawson and John Peck for the Bay of Despair.

James Cook’s survey of the Newfoundland became the first accurate large scale map of the island’s coast. It was also the first scientific, hydrographic survey achieved through using triangulation to establish land outlines. This achievement caught the attention of the Admiralty and Royal Society during an important part of his career and for the British overseas discovery. Cook then set a target to go as far as possible for a man to go.

James Cook was approached by the Admiralty to command a scientific voyage on the Pacific Ocean in 1766 to observe and record the transit of Venus across the Sun to help the Royal Society in determining longitudes. To enable him to gain the needed command James Cook was promoted to lieutenant. He embarked on three voyages from 1768 to 1779. During the voyages, James Cook mapped the New Zealand with few errors, and his expedition to the southeastern coast of Australia on April 19, 1770, made them the first Europeans to do so. After the first voyage, James Cook was promoted to the rank of commander in August 1771. His second voyage was in 1772 in the search of the hypothetical Terra Australis. Commanding the HMS Resolution, James Cook became one of the first to cross the Antarctic Circle.

During this voyage, James Cook discovered and named Clerke Rocks and the South Sandwich Islands. However, the core mandate of discovering the Terra Australis was not fulfilled putting to rest the myth surrounding it. His last voyage in 1778was to locate a North-west Passage of the American continent. This made him the first European to have a formal contact with the Hawaiian Islands.

James Cook has been named after several monuments, places, and businesses. James Cook is named after the Apollo 15 command/Service Module Endeavour, and the shuttle Discovery was named Cook’s HMS Discovery. Several institutions including James Cook University in Australia, James Cook Hospital, Cook Islands, Cook crater on the moon and the Aoraki/Mount Cook in New Zealand and Mount Cook in the US state of Alaska. He is also named after the Royal Research Ship RRS James Cook built in 2005 among several others. He was at number 12 in the BBC’s poll of 100 Greatest Britons in 2002.

On December 21, 1762, James Cook was married to Elizabeth Batts, the daughter of Samuel Batts who was his mentor. The couple was blessed with six children namely, James, Nathaniel, Elizabeth, Hugh, Joseph, and George. Cook died when James Cook tried to kidnap the King of Hawai’i, Kalaniopus on February 14, 1779. It was after he had some confrontation with some natives of Hawai when a group stole his small boat.

He was first hit on the head with a club by a chief, Kalamanokaho’owaha and later stabbed by the King’s attendant, Nuaa. Cook was killed alongside four other marines, Corporal James Thomas, Private Theophilus Hinks, Private Thomas Fatchett and Private John Allen.