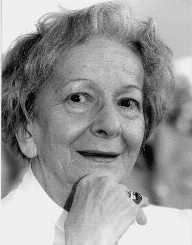 Wis?awa Szymborska was born on July 2, 1923. She was a Polish essayist, poet, and translator. She started writing poems at the age of five, but she became famous at the age of twenty-two. In 1996, she received the Nobel Prize in Literature. She wrote poems until her death.

Wis?awa Szymborska was born on July 2, 1923, in Prowent, Poland. She was born to Wincenty Szymborska and Anna. She started writing poems at the age of five while she was in elementary school. She attended an elementary school in Torun. She gained an interest in poetry and literature because her home was filled with people reading books and her father inspired her more by reading her poems and awarding her every time she wrote a good poem. In 1931, her family moved and settled in Krakow. At Krakow, she attended a Covent School, but she did not finish her studies at the school. During World War II, Germany occupied Poland.

In 1940, Polish citizens were not allowed to attend public schools. She continued her studies in an underground school. In 1943, she began working at a railroad company. She also got a job of creating illustrations for an English language textbook. She also began writing stories and poems. In 1945, World War II ended and she joined the Jagiellonian University located in Krakow to study Polish literature. She later began studying sociology. In 1948, she left the school before earning her degree because of financial difficulties.

In 1945, while still a student she made her debut with the poem ‘I Seek the Word’ which was published in a Krakow Newspaper known as ‘Dziennik Polski. Her poems started appearing in local newspapers and periodicals. In 1948, she became a secretary in a bi-weekly educational magazine. She was also an illustrator for the magazine. She did not, however, stop writing poems. In 1949, she finished her first collection of poems. Her book was however not published because it did not reflect the communist ideology of post-war Poland. In 1952, she published her debut collection titled ‘That is What we are Living For’ which contained poems that portrayed her political belief. In 1953, she became an editorial staff at the weekly magazine Literary Life and a member of Polish United Workers’ Party.

In 1954, Wis?awa Szymborska published her second collection ‘Questions Put to Myself.’ In 1957, she shifted to communist ideologies and published her third collection ‘Calling Out to Yeti.’ The collection made her leave the Polish United Workers’ Party. In 1962, she published ‘Salt’ which led to her establishment as a mature poet. In 2013, her book ‘The Glimmer of a Revolver’ was published posthumously.  In 1968, she ran her own book review column. She was also a translator of French poetry. Her other collections include ‘No End of Fun,’ ‘Colon’ and ‘Could Have.’

In 1948, she got married to Adam Wlodek with whom she had no children. They separated in 1954, but they remained friends. She died on February 1, 2012, in her sleep at her home in Krakow. She died at the age of eighty eight. Currently, her poems have been included in school syllabus.  Her works have been translated into different languages.